Even As A Diehard Paul Pierce Defender, I Simply Cannot Endorse His Latest LeBron James Take 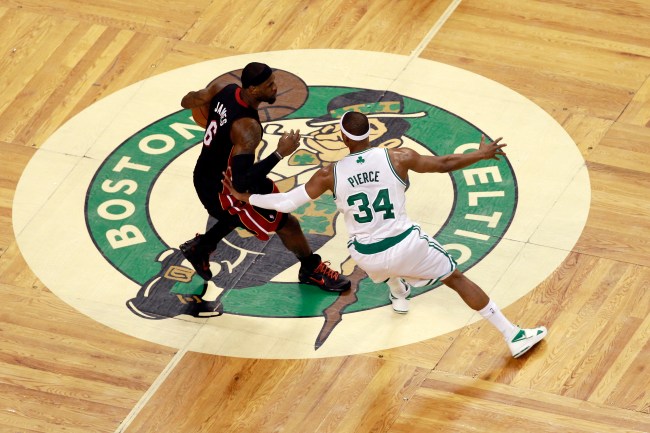 LeBron James not only had the greatest playoff performance of his career, but one of the greatest of all-time.

With this performance, LeBron became the only player in NBA history to score at least 45 points two times while facing elimination on the road (the other in 2007 when LeBron scored 29 of the Cavs’ final 30 to beat the Pistons).

I felt emasculated watching LeBron drop his genitals on my beloved franchise for 48 minutes, and there were 22,000 other people there who I know felt the same.

You know who else was there? Paul Pierce.

Pierce, who just two years ago said that LeBron is a combination of Michael Jordan and Magic Johnson, seems to have changed his tune.

The Celtics legend has omitted LeBron from his top-5 NBA All-Time list, choosing the following five players in his place.

“Bill Russell built up the organization in Boston. He should get way more credit than we give him, and a lot of times he gets left out of the conversation,” Pierce said. “So in saying that, Kareem, Magic , Jordan, Tim Duncan, Kobe, Bird. These guys are all-time top 10 players who either helped build up their organization or continued the tradition.”

“He went and put together a team in Miami, and in some ways, he came back to Cleveland to put that team togeter, and then he went to the Lakers, where a tradition has already been made,” Pierce said. “And we don’t know, you know, that’s still to be continued. So in saying that, that’s my argument.” [transcribed by CBS Boston]

Paul, can we talk?

I know you are one of the most under-appreciated NBA players in recent memory and for over a decade, the world was robbed of your abilities because the Celtics organization surrounded you with rec-league scrubs, but this ain’t it my man.

LeBron James wasn’t letting Miami go home early. James dropped 45 points and 15 rebounds in a Game 6 win over the Celtics to avoid elimination in the 2012 ECF. One of my favorite King James performances.pic.twitter.com/ZDXNUsU5uQ

Give the man his proper due. It’s the only way we can truly heal.