Paulina Gretzky Shares Dustin Johnson’s Reaction To Her Playboy Offer, Her Dad’s Thoughts About Her Instagram 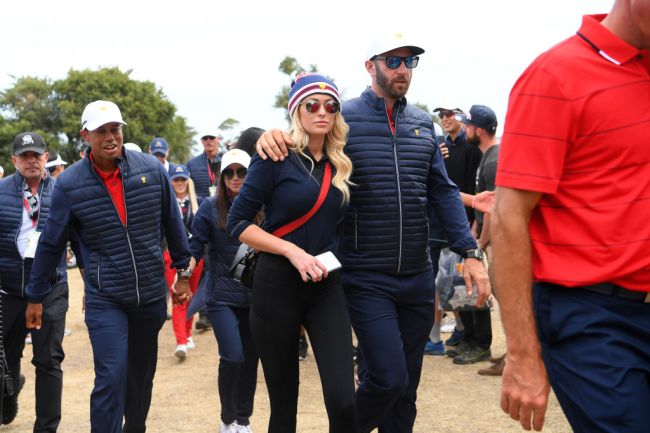 Paulina Gretzky is an extremely popular person. That comes with the territory of being the daughter of the greatest hockey player to ever live, add that she’s engaged to the No. 1 golfer in the world, and the fact that she has just shy of 1 million Instagram followers, she’s very much in the spotlight.

While she’s had attention surrounding her practically her entire life, Gretzky has been relatively quite when it comes to actually speaking with the media. People know who Paulina is, but the world doesn’t really know all that much about her personally.

Gretzky keeping her distance from the media is obviously by design, but she’s recently started to open up a bit more. This week she joined the ‘Pillows and Beer‘ podcast with Craig Conover and Austin Kroll of ‘Southern Charm’ stardom. Gretzky’s Instagram was obviously a topic of conversation, specifically what her father, Wayne, thinks of her online presence.

“No, Wayne Gretzky is not shielding his eyes every time he logs onto social media. The haters are like, ‘Wayne would be so upset.’ I’m like… ‘My dad is not looking at my Instagram right now,'” Gretzky said, according to Hollywood Life. My dad is like, ‘I love you.’ He’s just not.”

Staying on the topic of photos, Paulina Gretzky also talked about Playboy approaching her years ago wanting her to do a spread in the magazine. This was back in the early days of her relationship with Dustin Johnson, and while she didn’t immediately tell the magazine no, Johnson let his opinion on the matter be known.

Gretzky shared that Johnson told her that he’d match the amount of money they were offering if she didn’t go through with it. She never worked with the magazine, and the rest is history.

Gretzky and Johnson have been engaged since 2013 and have two sons together. They’ve reportedly set a date for their wedding to take place at some point this year.