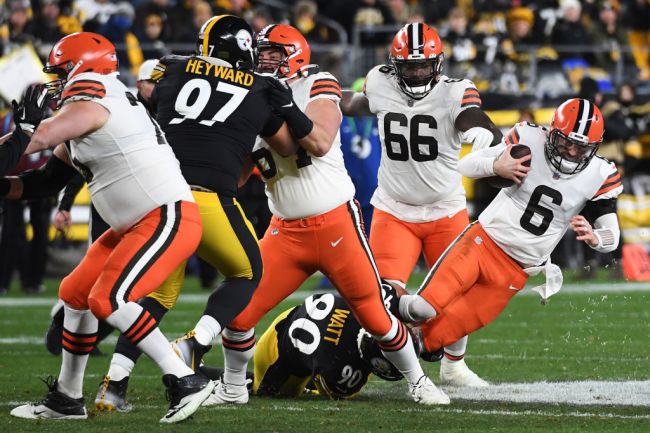 As the Baker Mayfield drama continues to drag on, football fans have been treated to a new level of insight into just why things didn’t work out between a team and their star quarterback. Fans didn’t even get this much information when the Eagles dumped Carson Wentz because it was apparently his fault the team couldn’t block and had no receivers.

Today, ESPN gave fans a truly in-depth look at how this situation got so bad so quickly and provided some interesting new tidbits along the way.

One of those tidbits is that some of the people close to Baker wondered if the Cleveland Browns were actively trying to make him look bad in a January loss to the Steelers.

Baker Mayfield still in limbo with Browns: How he got here, and what's next? https://t.co/2pGQUCRVqA

According to multiple sources, those close to Mayfield — who to that point had missed one game because of his shoulder injury — wondered at the time if the Browns were trying to make Mayfield look as hapless as possible in prime time, to potentially pave the way for the franchise to more easily explain why it might be moving on from him in the offseason.

The game in question saw the Browns thoroughly dominated by the Steelers. Their division rival racked up 9 sacks, including 4 from TJ Watt. Baker managed only 185 yards, 2 touchdowns, and 2 interceptions.

While there is absolutely no way we’d ever find out for certain that the Browns were actively trying to make their starting quarterback look bad, their game plan certainly didn’t do anything to help him look good that night. Their running game never got going and they allowed an already injured Baker to be hit repeatedly.

If this conspiracy theory were to somehow actually be revealed as accurate, it would make the Browns’ struggles to trade Baker Mayfield make a whole lot more sense. Maybe the rest of the league just already knew that the Browns were so sick of Baker they’d cut him before allowing him to start for them during Deshaun Watson’s assumed suspension.

Maybe it’s as simple as the Browns front office was as unprepared for this offseason as their coaching staff was for that game against the Steelers. I guess we’ll never know for sure.