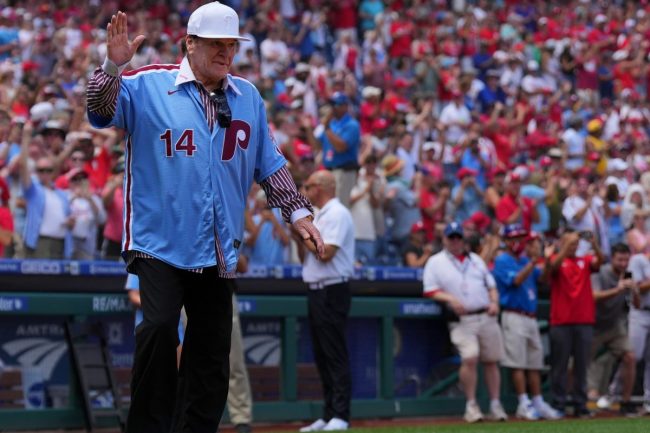 Pete Rose was on hand for Sunday’s matchup between the Phillies and Nationals. The return was part of a celebration for the 1980 Philadelphia team that brought a World Series championship to the City of Brotherly Love.

Rose always comes with a bit of controversy.

He was involved in the gambling scandal that’s kept him from the Hall of Fame, despite being the MLB’s all-time hits leader. There was also a statutory rape claim, which he was asked about Sunday afternoon.

Never one to bite his tongue, Rose made headlines once again by going on a NSFW rant in the Phillies broadcast booth.

When speaking on his past playing days, Rose went into a not-safe-for-work rant that had the broadcast team immediately attempting to change the subject.

He was telling a story on former Phillies player John Kruk, and he went off the rails. Rose throws out a story of someone hitting a “cock-high fastball,” before closing his segment out with a “no shit.”

Social media was quick to chime in on Rose’s comments.

Take a look at the immediate reaction on Twitter.

They really put this guy on the broadcast. Just a humiliating day for the Phillies and NBC Sports Philly. https://t.co/a33tcEZQDK

Apparently, this was one of many references made by Rose.

This was a minute earlier https://t.co/UxrofeYol5

Next time, they’ll probably think twice before inviting Pete Rose back in the broadcast booth.