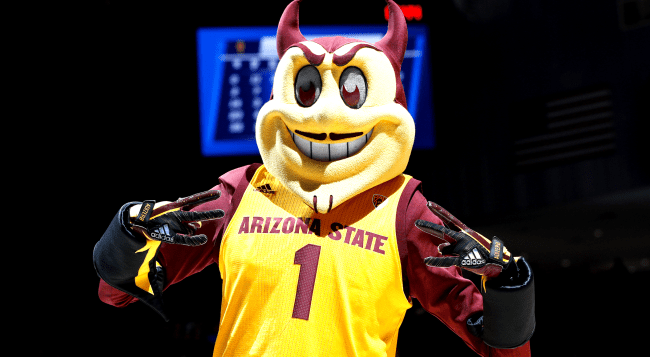 Are you offended by that mascot you see in the photo above? Were you a very happy when the Tampa Bay Rays dropped the “Devil” from their nickname? If you said yes to both of those questions then have we got a petition for you!

Last week, Arizona State University’s mascot Sparky the Sun Devil was named one of the “most offensive” and “creepiest” college mascots in America, according to a dubious survey.

By the way, Florida State’s Osceola and Renegade, San Diego State’s Aztec Warriors, Hawaii’s Vili the Warrior, Notre Dame’s Leprechaun, and Pistol Pete from Oklahoma State, were all deemed to be worse than the Sun Devil.

That, however, was enough for someone to start a Change.org petition asking Arizona State to change the Sun Devils name to, wait for it… the Sun Angels.

They’re not even close to kidding either. The person who created the petition to change Sun Devils to Sun Angels wrote an eye-watering 1,430 words explaining why.

• “Anyone with an ounce of Christian belief will have a hard time pledging allegiance to…being loyal to…or spending money with the devil. With every T-shirt, souvenir and game ticket they sell, they solidify their consent that idolizing the devil is just ﬁne with them.”

• “The school was not always so Luciferian. The original name was the OWLES and later they changed to the NORMALS and once again to the BULLDOGS. Sun Devils is the 4th name for ASU’s namesake voted on by a very small ASU student body in 1946.”

• “The devil association becomes even stronger when you consider ‘Sparky’ the full-blown devil mascot, complete with a pointy tail and 3-pronged pitchfork trident. Even the ‘Fork-em’ slogan connotes something decidedly non-Christian – a lewd, pitchforked hand gesture often seen during games from the ‘Inferno,’ where student fans raise their tridents to celebrate a good ‘forking.’ It could be a plot from a B-rated fraternity movie – if it weren’t actually true.”

• “This is a school that has clearly lost its way and a place good Christians might want to reconsider sending their kids to.”

• “Your support sends a strong message that there is a big difference between school spirit and glorifying the devil.”

• “Keep in mind the Archangels cast the devil out of heaven, so the devil is actually history’s biggest loser.”

• “As of 2019, ASU had over 90,000 students. That’s 90,000 devils we can do without. In 10 years it will create another million devils and rake in hundreds of millions in revenue from that – hardly a noteworthy achievement for an institution of higher learning.”

• “As someone who puts God first in my life, I despise that I am inadvertently and permanently associated with the devil simply because I chose to get a college education. Nobody should have to own a lifetime membership card to an organization that idolizes a demon.”

It’s a really forking good petition. So good, in fact, that, as of this writing, over 3,100 people, all angels we presume, have already signed it.