Petr Cech, One Of Soccer’s Great Goalies, Is Now A Professional Hockey Goalie And Saved A Penalty To Win The Match On His Debut 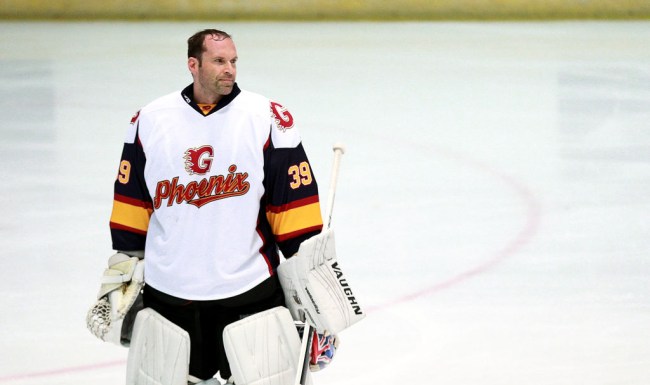 Like me, you’ve probably only ever seen Petr Cech wearing a Chelsea or Arsenal kit so the picture above may throw you off a bit, but he’s now a professional hockey goalie and apparently, he’s not too bad.

After leaving Arsenal at the end of last season, the 37-year-old took a technical advisor position with his former club Chelsea but he apparently still has an itch to compete because on Oct. 9th he signed with Guildford Phoenix of the Elite Hockey League in the UK to begin his hockey career. He will keep his position at Chelsea despite the move to the ice.

On Sunday he made his debut in the crease and put on quite the show. Not only did he post a shutout in his first career start on ice he saved two penalties.

🏒 Named Man Of The Match.

What a start, Petr Cech 👏pic.twitter.com/swjw0SVBXE

In the video, you can clearly see that Cech certainly looks the part with his 6-foot-5 frame and the reflexes we saw during his 15-year career on the field haven’t left him just yet. He was rightly named man of the match following his debut performance.

After the game, Cech told The Independent that playing hockey has been a dream of his since he was a child.

“It was a childhood dream for me to play even one game of ice hockey. I’ve done that now and nobody can take that from me. If you have a dream, you chase it and you do everything to make it happen. I’ve done that in football and all my dreams have come true.”

When you’ve got it, you’ve got it. You definitely can’t fault a guy for chasing a dream like playing professional hockey at the age of 37 and it coming to fruition.