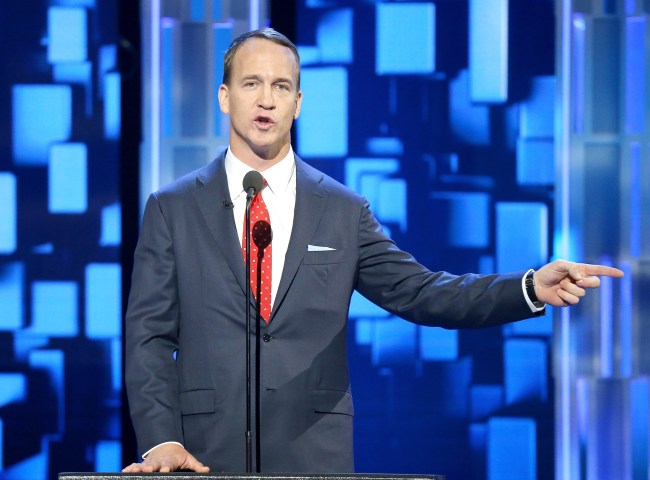 When Peyton Manning was a free agent during the 2012 offseason, he was, arguably, the biggest name to ever hit the market. This is a quarterback who was bound for the Hall of Fame. A guy who had already won a Super Bowl. A player who was on pace to break all sorts of NFL passing records. Of course, he was also a guy coming off of a serious neck injury, so there were lots of question marks about the player he would be once he returned to the field.

While Manning ultimately signed with the Denver Broncos — where he added another Lombardi Trophy to his resume — the quarterback’s wild free agency was about as chaotic as imaginable. Given Peyton Manning’s legendary status back then, every NFL team was hoping to get in line to see the guy work out, with the entire process being as secretive as possible.

In a recently published article by The Athletic, Manning’s free agency was broken down, which offered some strange tidbits that included a CIA-like security level to protect any media from leaking news, as well as some wild stories about Manning’s time with former San Francisco 49ers (and current Michigan Wolverines) head coach Jim Harbaugh. Although Harbaugh’s team at the time missed out on Manning, the coach sure did leave quite the impression on the quarterback; albeit a really weird one.

“I remember this — I remember weird things — we were leaving to go throw and Mrs. Cutcliffe, who I’ve known forever, just a sweet lady, she said, ‘Would y’all like anything to eat before you go?’” Manning recalled. “It was one of those when somebody offers you, you kind of get the feel maybe she really didn’t want to make you something to eat, but she felt like she had to offer, that kind of thing. So I was like, ‘No, thanks, Mrs. Cutcliffe, I’m fine,’ and Greg Roman’s like, ‘I’m fine, Thank you for offering.’ And coach Cut’s like, ‘I’m fine, honey.’

And that was just the beginning. As it got a little weirder, Manning says.

“So he had his peanut butter and jelly sandwich and we went over to Duke,” Manning said. “There were some media around Duke. The best thing about Duke, which I didn’t really understand coming from Tennessee, is that it’s a private school. You got to have a key card to get in, and nobody can just pop into the indoor facility. I used to go back to Knoxville and work out, and anybody could just show up. It’s a public facility. At Duke, Cut and I could have intense workouts and not be interrupted. So, we told Coach Harbaugh and Coach Roman that it’s private, but still, there are trees out there and, ‘Could there be people in the trees?’”

As if that’s not strange enough, Peyton’s older brother, Cooper Manning, was also in attendance that day, and described the surreal scene.

“There was this CIA feel to a football acquisition,” Manning said. “Harbaugh and his coordinator went to his workout and watched from his car. I mean, what can you tell from a car?”

It’s pretty hilarious hearing Peyton Manning and his brother Cooper retell the story about working out for Jim Harbaugh and the Niners back then. Like, who can’t imagine the eccentric Harbaugh sitting in his car in his perfectly ironed khakis just housing a PB&J sandwich? It’s almost too perfect.

As strange as the whole Harbaugh thing might be, it seemed to be par for the course when it came to Manning’s free agency that offseason. Like, seriously, when it came to keeping things secretive, the quarterback kept it next level, even using the word “kidnapped” when describing how the Tennessee Titans used a wide receiver of theirs to work out with the signal-caller.

Peyton: It was in the rain, and they brought some of their executives and receiver Marc Mariani, a return man, as well. They picked Mariani up at the airport and they basically gave him some cleats and said, “We’re not telling you where we’re going. Turn your cell phone off.” He couldn’t call anybody. He couldn’t tell anybody what he was doing. It’s almost like they kidnapped him.

All of this is definitely strange AF, but when a team is trying to appease to an icon like Peyton Manning, that team does anything possible to play by the guy’s rules. Who knows if Jim Harbaugh’s peanut butter and jelly sandwich may have hurt his chances at ever getting a real shot at signing the quarterback, but, even eight years later, it sure as hell stands out to the future Hall of Famer as being weird.