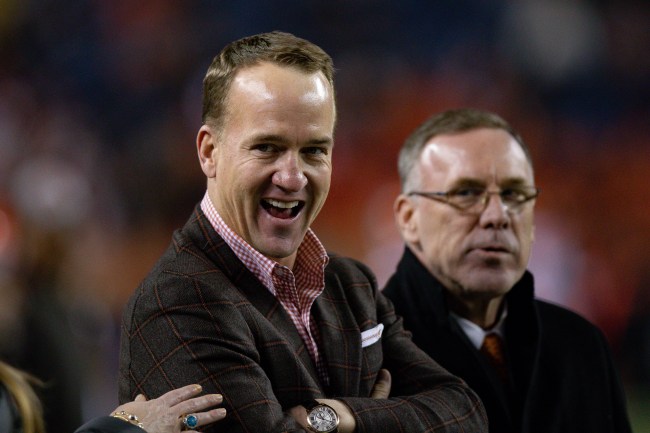 Peyton Manning is, arguably, the best passing quarterback the NFL has ever seen. From holding numerous records to recreating how the position is played, “The General” was like a surgeon performing an operation every weekend, dissecting a defense and letting fans get into the beautiful mind of a signal-caller. It was rare to see at the time, but Manning set the standard for what quarterbacks are asked to do today.

Since he’s a student of the game and can use his instincts to evaluate and analyze games, it’s no wonder that Peyton Manning has long-been rumored to join a broadcast team, with Monday Night Football rumored to be aggressively recruiting him over the past two years. While Manning has done some TV work — notably appearing in Detail on ESPN+, which is like being in the film room with a soon-to-be Hall of Famer — he’s hesitated and calling live games. The reason? Apparently, because he’s too loyal to brother Eli Manning and some of his former Denver Broncos’ teammates.

That’s according to Charles Robinson of Yahoo Sports, who said that Peyton didn’t want to put himself in a position where he may have to criticize on national television anyone who he has strong ties to, which is why, if Manning does ever shift into the MNF booth, it’ll probably come after Eli retires.

“If he ever decides [Monday Night Football] is something he wants to do, it’s going to be after Eli has finished his career and he gets a little bit further from his era of playing and maybe some of his teammates have moved on, too,” a source told Robinson. “It would have been a tough position for him this season, with the Giants [and Broncos] being on the schedule. There is a lot of loyalty there for him and I don’t think he’d ever want to be in a position where he’d be conflicted about his analysis. It just wouldn’t have been a comfortable situation this year.”

Whether Robinson’s report is 100% true or not, the idea does make plenty of sense. After all, ESPN+‘s Detail with Peyton Manning is a taped show — as is a new one he’s doing with the streaming content app — which means he’s not in the moment worrying about criticizing a former teammate or, worse, his brother. It gives the former quarterback a chance to remain bias without being overly critical, which seems to fit him better anyway.

Peyton Manning isn’t necessarily one to ruffle feathers with his comments, so, while he did say earlier this year that he and the Monday Night Football team talked, per Ryan O’Halloran of the Denver Post, he was quick to say that it might not be the right time; both now nor never.

“I talked to the Monday night football folks,” Manning said. “I enjoyed talking to the them. I had great conversation. It wasn’t the right time this year. Maybe it will never be.”

After seeing the debacle in the Monday Night Football booth last year — where audiences couldn’t stand the mistakes and commentary from since-resigned Jason Witten — having some zingers and dad jokes from Peyton Manning would’ve been a welcome sight. Unfortunately, he’s too loyal to some of the guys he used to play with, so we’ll have to see if he ever gives the booth a chance in the future; because he’d be really great at it.