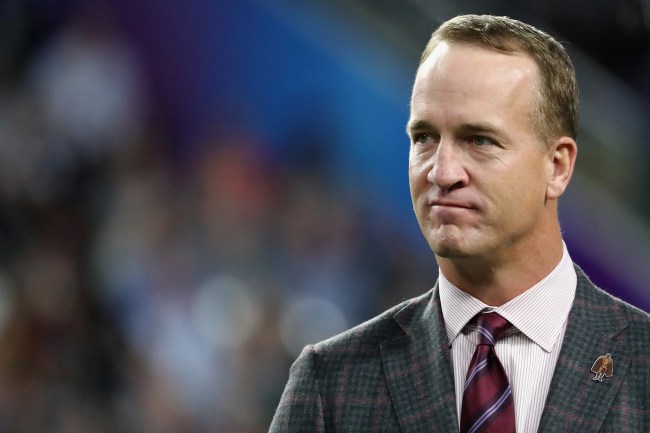 Peyton Manning has long-been rumored to, at some point, make the move into sports broadcasting given his wit and knowledge of football, but is the Monday Night Football opening the one for him? It could be — and ESPN’s reportedly willing to pay lots and lots of cash for Manning to come into the booth.

Following the announcement last week that Jason Witten’s one-year debacle on Monday Night Football would end with him returning to play for the Dallas Cowboys, ESPN’s exploring a bunch of different options to replace the guy. Obviously, that includes Peyton Manning, who the network has already developed a relationship with through the ESPN+ show Detail, which has the former quarterback dissect numerous plays for viewers, giving his insight in a unique way.

But is that relationship — and millions of dollars — enough to persuade Peyton Manning to give up his full-time retirement for a national TV audience? According to the New York Post‘s Andrew Marchand, it sure sounds as if the Monday Night Football gig is Manning’s to lose, and that ESPN is willing pay top dollar in order to make it happen.

In the near term, ESPN likes the post-Witten base it has with play-by-player Joe Tessitore and Booger McFarland, but it will still make the requisite inquiry into Manning, though the expectation is Manning will stay on the sidelines.

A year ago, ESPN was willing to top Jon Gruden’s $6.5 million for Manning. It would do that again and has developed an expanding relationship with the legendary quarterback through his ESPN+ show, “Detail.”

Barring a Manning Hail Mary, the immediate expectation is ESPN will keep Tessitore and McFarland and may just switch to a traditional two-man booth.

While ESPN’s trying to lure Peyton Manning into the Monday Night Football booth for the second-straight offseason, Marchand’s story sure makes it sound as if the future Hall of Famer has no interest in the job. If that’s the case, the network has also been linked to CBS’ Tony Romo — who’s still under contract with his network for $3 million this year, but could potentially get poached for Monday Night Football — as well as former players like Kurt Warner, Jesse Palmer, Louis Riddick and Matt Hasselbeck. Those last four names were all in the “final mix” for the Monday Night Football gig last year before ESPN chose Witten.

Who knows if ESPN’s going to pull a rabbit out of its hat and persuade Peyton Manning to join MNF, but, regardless, it has some other options that could be entertaining for viewers. Anyone has to be better than Jason Witten was last season, right?