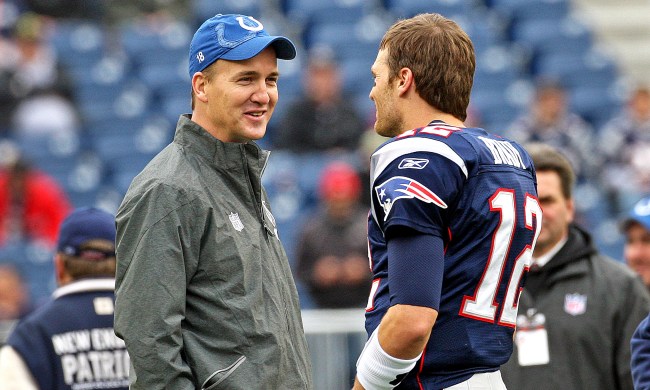 Earlier today we saw a clip of Phil Mickelson dishing out some quality smack talk to Tiger Woods (Woods gets the last laugh), but the real highlight of the press conference for “The Match” charity golf event was when Peyton Manning decided to go in, hard, on his longtime rival Tom Brady.

“Tiger and I talked to the sheriff in Tampa, and he’ll be allowed to go to Palm Beach to play,” Manning continued, relentless in his trash talk.

“I’ll be honest, I’ve never played Tom very well on his home turf, so maybe this is considered a neutral site,” added Manning. “And I would’ve have loved to have had this tournament in a place where they don’t like Tom very much – Indianapolis, Denver, Boston, after he just betrayed them and broke their hearts, so… Palm Beach is the best we can probably do.

“Look. I think the teams are fair,” he went on. “I think, you know, Phil chose the right partner in Tom. Together, you know, they have 11 championships. Tiger and I have 17 the way I count it, right Tiger?”

Who knew Peyton Manning was so cold-blooded?

Brady couldn’t have too hurt though, other than from perhaps some stomach cramps due to all the laughing he was doing, since he was the one who ended up posting the video on social media.

In fact, Brady even cracked a Deflategate joke during the presser, getting his own little dig in on Manning.

“I’ve been studying a lot of film and filming a lot of Peyton’s rounds the last couple weeks, so I feel like I’ve at least got a head start on that,” said Brady. “Part of it is the preparation, and that gives you a lot of confidence. I feel like, in two weeks, when we actually start, I’m going to be prepared.

“I know what I’m going against. Hopefully, after Phil and I win, they don’t go and try to change the rules on us or send the tapes into the NFL. I don’t know if Peyton can still do that now that he’s retired and change some of the rules to try to make it easier the next time.”