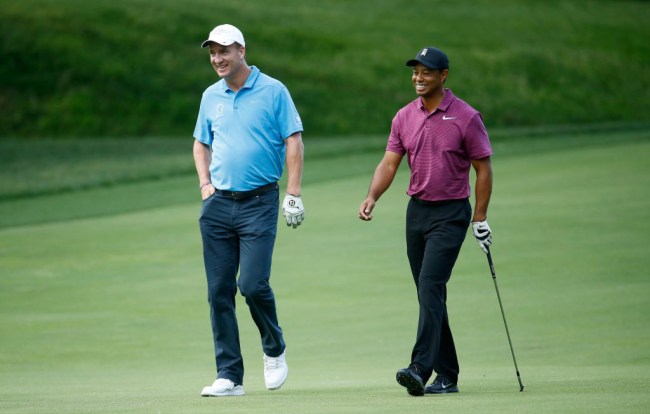 Peyton Manning and Tiger Woods are set to team up together and take on Phil Mickelson and Tom Brady in The Match: Champions of Charity in late-May. With the charity event coming up it’s the perfect time to look back at some of the great memories Woods and Manning have already shared on the golf course in years past.

While they’ll be teammates in the upcoming event, that doesn’t mean that the two haven’t thrown jabs at one another in the past.

Ahead of the 2014 Arnold Palmer Invitational, Manning sat down with Golf Channel and told an incredible trash-talking story that actually served as motivation for Woods to retake his throne as the No. 1 player in the world.

Manning was known for changing plays at the line of scrimmage and his rather loud audible calls during his playing days. He explained that when he was still playing for the Colts one of his audibles was ‘Tiger’ for snap on one and ‘Phil’ for snap on two. Back then Woods was the No. 1 player in the world while Mickelson, more often than not, was No. 2, so it made sense.

That wasn’t always the case, however.

Manning and Woods teed it up together in 2013 just after Manning finished his first season with the Broncos and Woods simply asked him the biggest difference between Indianapolis’ and Denver’s offenses.

“Tiger, it’s really similar,” Manning said to Tiger. “The hardest thing for me right now is that ‘McIlroy’ is on one and ‘Tiger’ is on two,” referring to Tiger’s entering the 2013 season ranked No. 2 behind Rory McIlroy.

Woods didn’t take the jab from Manning well and looked at him and said: “I’m going to get that fixed.”

In typical Woods fashion, he did get that fixed as he went on to quickly win two tournaments after Manning’s trash talk session, regain the No. 1 spot in the world rankings and have his name thrown back into the mix of Manning’s audible calls.

Woods held onto the No. 1 spot for 14 straight weeks during that 2013 season

Related: Tiger Woods, Phil Mickelson, Tom Brady And Peyton Manning Are Already Talking Trash To One Another Ahead Of Golf Match For Charity