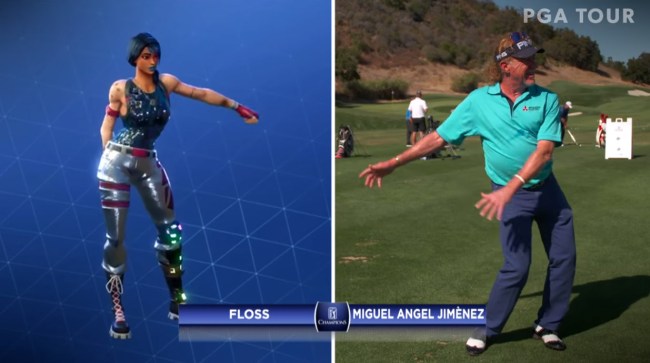 To celebrate the The 2019 PGA Tour Champions schedule being released, several, umm, age-challenged pros attempted to do the Fortnite dance moves. It was not pretty. Funny yes, but so not pretty. In fact, it’s pretty much nightmare fuel.

In the video, we get to see things that will be forever hard to unsee, including Bernhard Langer and Esteban Toledo make it rain, Miguel Angel Jimenez flossing, Jerry Smith doing the “Fresh” dance, Paul Broadhurst doing the “Jubilation” dance, Kevin Sutherland doing the “Zany” dance, and Tom Lehman and Tim Petrovic doing the “Best Mates” dance.

Then, just to guarantee that we all have nightmares tonight, they had Miguel Angel Jimenez also break out his best “Disco Fever” dance moves.

I didn’t think there could possibly be anything to derail the Fortnite juggernaut, but if anything can do it, it will be this video if it is seen by any significany number of the game’s players.

Dear God. The humanity. After that display, as far as I am concerned, I’ll never look at the game the same way ever again. And I am not alone in that sentiment.

This needs to stop never again