PGA Announces Controversial Changes To 2019 FedEx Cup Format, Plus How Tiger Can Still Win It This Year 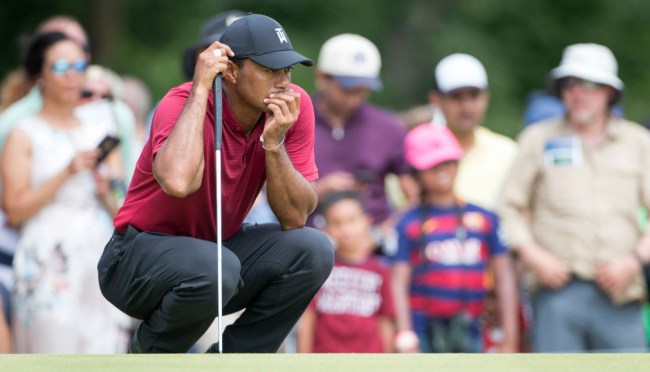 The 2018 PGA Tour season is winding down with the final tournament of the year taking place this coming weekend at the Tour Championship this weekend. Which also means that a new FedEx Cup Champion will also be crowned at East Lake Golf Club in Atlanta when the tournament is completed.

Heading into the Tour Championship, the FedEx Cup point standings are being led by Bryson DeChambeau in the top spot, followed by Justin Rose, Tony Finau, Dustin Johnson and Justin Thomas.

Sitting waaay back in 20th place is the focus of everyone’s attention whenever he plays, Tiger Woods.

Woods is one of only five players in the top 20 without a Tour win in 2018, however, that doesn’t mean that he has no shot at capturing the Cup this weekend. He does. It’s just… complicated.

Basically, Tiger has to win the tournament, hope that DeChambeau completely melts down, and count on a bunch of other top guys not finishing in the top five or better.

How Tiger can win the #FedExCup:

Still, the fact that Tiger Woods still has a shot at winning the FedEx Cup going into the tournament gives us all another reason to tune in. Something that more than likely won’t be the case in 2019 with the new format the PGA Tour just announced for the Cup.

The FedExCup Playoffs – which have been reduced from four to three events beginning next season and will conclude before Labor Day, allowing the TOUR to compete to own the August sports calendar – will feature fields of 125 for THE NORTHERN TRUST, 70 for the BMW Championship and 30 for the TOUR Championship, where the FedExCup Champion will be determined. While the points structure for the first two events will remain the same (awarding quadruple points compared to FedExCup Regular Season events), there will be a significant change to the format for the TOUR Championship.

Instead of a points reset at East Lake Golf Club in Atlanta, beginning with the 2018-19 event the TOUR is instituting a strokes-based bonus system related to the FedExCup standings through the BMW Championship. The FedExCup points leader after the first two Playoffs events will begin the TOUR Championship at 10-under par. The next four players will start at 8-under through 5-under, respectively. The next five will begin at 4-under, regressing by one stroke per five players until those ranked Nos. 26-30 start at even par.

With the implementation of this change, the player with the lowest total score will be the FedExCup Champion and be credited with an official victory in the TOUR Championship competition.

The 2018-19 #FedExCup Champion will receive $15 million, versus the $10 million prize from previous years. pic.twitter.com/fpEo0bNcg1

Let’s break that down in terms that are easier to understand.

Sinec 2004, the Tour Championship has been hosted at the East Lake Golf Club and the winning scores have ranged anywhere from 7-under to 23-under (Tiger in 2007). So if 2019’s rules were in place, you can see how it would be pretty much impossible for Woods to have any shot at winning the FedEx Cup.

“Compared to the current system, the beauty here is in the simplicity,” said PGA Tour Commissioner Jay Monahan about the changes. “Fans are very familiar with golf leaderboards in relation to par, so they will have a clear understanding of the impact every shot makes during the final run for the FedExCup – ultimately leading to a singular champion without conflicting storylines.”

While that may be true, it will limit the number of players starting the week in contention. Not sure that’s the best idea, but we shall see, won’t we?

How could we change the playoff finale… pic.twitter.com/e0kgZnYSL4