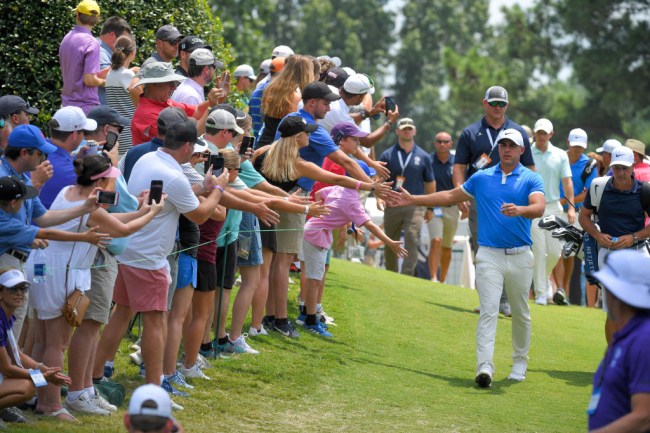 The PGA Tour has not allowed any fans or non-essential staff on the grounds of any tournament since the season resumed in mid-June, but that’s about to change, sort of.

According to Golf Digest, an email was sent to players on Wednesday night explaining that tournaments and title sponsors will be allowed up to 50 guests per day Thursday through Sunday beginning at next week’s WGC-FedEx St. Jude Invitational in Memphis. The spouses and significant others will also be allowed on-site during tournament days.

These newly allowed guests will reportedly not be subject to testing, instead, they will be required to undergo temperature checks and fill out a questionnaire each day they arrive at the tournament.

The Tour is also set to debut ‘virtual player engagement’ in an attempt to replace Wednesday pro-ams, which haven’t been played since the season got back underway. According to the report, up to 30 players would be required to take part in a Q&A while another 10 players would become available to partake in similar activities on Tuesday and Wednesday as well.

Right now, between players, caddies, volunteers, media, and essential staff, there are approximately 1,100 people on-site at tournaments, but these new rules would raise that body count to approximately 1,600.

Heading into this week’s 3M Open in Minnesota, Grayson Murray tested positive for coronavirus becoming the seventh known player on Tour to do so while three caddies have reportedly tested positive.

The Tour is coming off of playing back-to-back tournaments at Muirfield Village where there were no positive tests reported. Given the relatively solid and smooth transition back into the season, it’s clear the PGA Tour is ready to slowly start introducing more people on-site at tournaments.