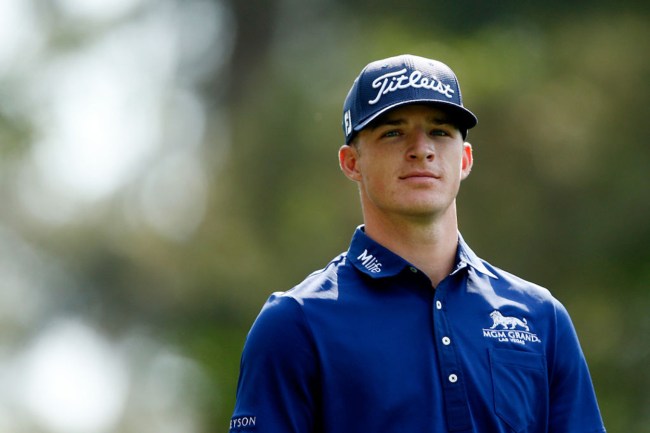 Back in 2009, during his freshman year at the golf factory that is Oklahoma State, Hoffman burst onto the scene quickly becoming the No. 1 amateur in the world. Fast-forward a few years and in 2012 he earned his PGA Tour card before picking up nine Top 10 finishes over the next handful of years.

Hoffman may not have been a PGA Tour star, but he was certainly an established player, and with what was taking place in regards to his health, it was all the more impressive.

During his final three seasons at Oklahoma State, Hoffman noticed that he had started to lose muscle mass seemingly out of nowhere and thought his sternum had extended to the right a bit. He didn’t think too much of it given he wasn’t in pain but started to look for answers as he continued his journey on Tour.

Finally, that answer came in 2016 when doctors told him that he had Facioscapulohumeral muscular dystrophy. He went public with his diagnosis via the Players Tribune in 2017 and his game started to struggle not too long after that.

Dan Rapaport of Golf Digest recently went to visit Hoffman and wrote quite the story about what life has been like away from golf.

Hoffman had no plans to prescribe to Western medicine, which predicted he would essentially wither away, so he went with the alternative medicine route.

He changed his diet completely, even went with an all-raw diet at one point, and once went 17 days eating nothing but grapes. That’s not the strangest method he’s tried, however, Hoffman has also done urine therapy.

“After missing six cuts in a row at the beginning of 2018, with his swing speed having dropped below 110, he decided to take a break from the game and headed for the mountains of Nepal, where he spent 90 days living off the grid,” Rapaport writes. “

“That’s where he first encountered urine therapy, an ancient treatment that can involve drinking one’s urine, rubbing it all over the body and, of personal interest, the gums. Upon hearing this, I share my ailment: My gums have receded considerably, the product of a nasty dip stage in college and overaggressive tooth-brushing.”

“You know what’ll fix that in, like, two weeks?” he says, cracking a smile that says I can’t believe I’m about to say this to you. “Swishing urine around your mouth every morning.”

Hoffman, currently living in Costa Rica with his wife Chelsea, was preparing for a 10-day urine cleans when Rapaport visited him. He’d eat no food and drink no water, but only drink a cup of his own urine in the morning and the evening over the next 240 hours.