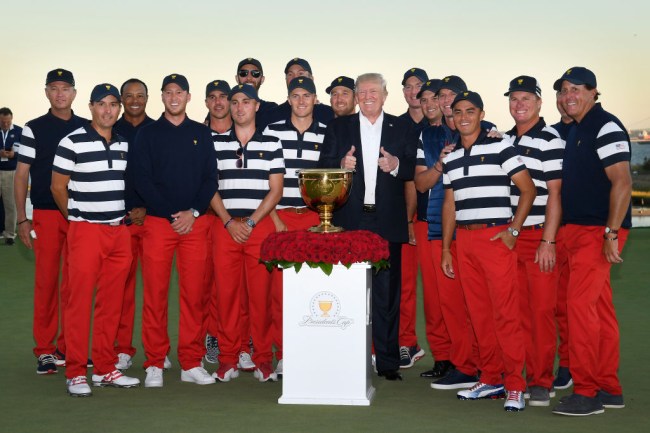 On Wednesday we got a snippet of GOLF’s annual anonymous pro survey as it revealed that Bryson DeChambeau is the least-favorite playing partner among PGA Tour players, but now we’ve got the results from dozens of hot topics and questions.

The survey results come from 52 card-carrying PGA Tour pros at the Safeway Open back in September. They gave us takes about Donald Trump, using CBD, smoking pot, and even having sex on a golf course.

The survey did reveal some hot takes from the players on this topic with one player saying ‘hell no’ and another saying ‘not if he gets impeached’.

One of the more interesting and new-age topics among Tour players at the moment is the use of CBD oil. One of the survey questions was ‘what percentage of the players in the Top 125 would you estimate regularly use CBD products’ and 29% was the average of all of the responses. Ten to fifteen percent said ‘not as many as you think.’

Marijuana was also a topic of the survey and 57% of players said they believe it should be taken off of the banned substance list, but only 20% revealed that they had smoked pot or ingested edibles in the last year.

A couple of the questions were a bit more personal, too, like ‘do you know of any active players who are gay’ and there was only one response of yes.

With how many hours these guys have spent on a golf course in their lives it’s almost assumed that a majority of them have probably had sex on or at the course and the numbers somewhat support that claim with 41% saying they have and the other 59% saying no.  One player responded with ‘pro tip: avoid the sand’ while another said ‘I’d like to.’

It’s always interesting getting a look into these guys on a bit of a more personal level.