Phil Jackson Reflects On Time With Knicks, Rips Into Carmelo Anthony, Compares Own Treatment From Media To Trump’s 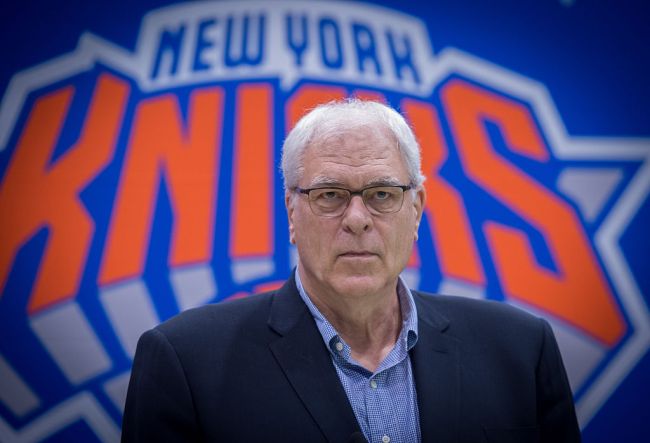 Phil Jackson joined former Lakers player Cody Karl on ‘The Curious Leader‘ podcast and reflected on his time as Knicks president. While he did take some of the blame for the team’s struggles, he also dished a fair share of the blame Carmelo Anthony’s way, as well as the media’s. Jackson also talked about being grateful when team owner James Dolan fired him in June of 2017 with $24 million still remaining on his five-year deal.

One of the more interesting topics Jackson touched on during the podcast was his relationship with Anthony, and that the feud between them was the reason Dolan ultimately fired him. Jackson said that Anthony wasn’t able to be the leader the team needed him to be.

“Carmelo, I think, wanted to be a leader, but I don’t think he completely knew how to be a leader as a player,” Jackson said. “And I think that the strength of his personality was intimidating to some of the coaches that were asked to coach the team. And so there wasn’t this compliance that has to happen between players and coaches. And as much I tried to interject my own beliefs, I don’t think you’re close enough to the ground in that situation to really be effective in dictating how things are going to be done.”

Jackson also admitted that he wanted to trade Melo, despite signing him to a five-year deal with a no-trade clause earlier in his tenure. According to Jackson, Anthony wasn’t open to being dealt away from New York until after Jackson was out of the picture.

“I wanted to trade Carmelo and … he’s got a no-trade clause that they asked for, but I suggested that if there was a situation — and I asked them to trade, I wanted them to be compliant with it,” Jackson said. “And you can have all your choices that you want but I want you to go along with the idea that maybe when your time has come with being with the Knicks. So that was met without compliance.”

Based on Jackson’s comments, there were a lot of moving parts that were going against him during his time in New York, but some may not have been more impactful than the media. He compared the media’s treatment toward him to Donald Trump’s during his first few years in office.

“[The media] was decidedly against the organization, and they were looking for whatever they can do to throw aspersions,” said Jackson. “I kind of understand Trump had to live with probably for his first 3½ years in office with the media.”

It’s safe to say that Jackson enjoyed his time in Chicago and Los Angeles much more than his stint in New York City.