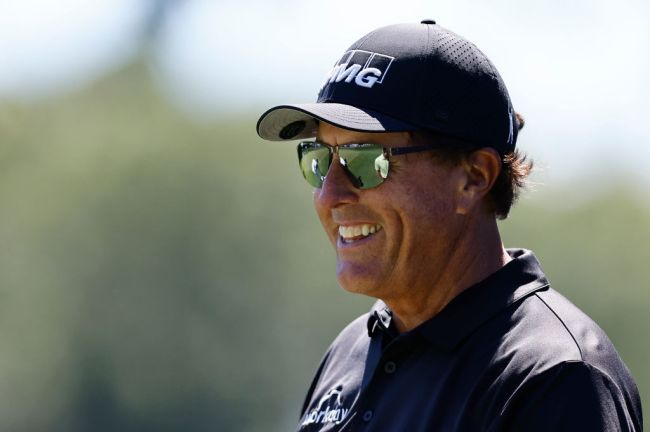 Phil Mickelson and Bryson DeChambeau decided to play a practice round together ahead of this week’s Rocket Mortgage Classic. The two get along well, plus it served as a great opportunity to hype up their match coming up next week with Tom Brady and Aaron Rodgers.

The trash-talk between the four has already started, but Mickelson took things a bit further during Wednesday’s practice round with DeChambeau.

While DeChambeau was preparing to tee off, Mickelson grabbed the 8-iron out of Bryson’s bag and bent it across his knee, clearly leaving a bend in the shaft.

It’s impossible to know whether the club was already bent and Mickelson was just pulling off the move for the camera, but after watching the clip a few times it certainly looks like he legitimately bent the club.

.🤫 Hopefully there’s a lot of 8 irons for @b_dechambeau this week @RocketClassic and next Tuesday’s Match 😂 pic.twitter.com/63yEO0eEgV

The golf world has been fascinated with Mickelson’s calves over the last few years, but we need to start talking about his knees perhaps being made of actual steel.

DeChambeau is likely swinging the stiffest shafts of any golfer on the planet, so for Mickelson to just bend his 8-iron that effortlessly is honestly kind of impressive.

Brady and Mickelson are set to team up to take on DeChambeau and Rodgers in next week’s match at Moonlight Basin in Montana on July 6. Brady and Mickelson lost to Tiger Woods and Peyton Manning in the most recent edition of ‘The Match.’

Last year’s match produced some pretty great content and hilarious soundbites, but given the fun these four have already had, we could be in store for the best edition of ‘The Match’ yet next week.