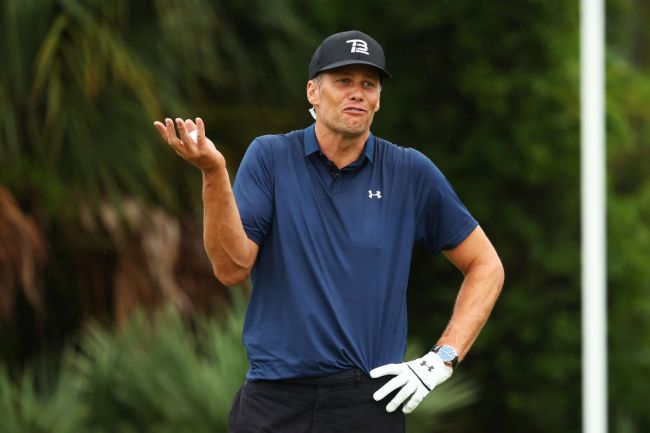 Tom Brady’s social team is better at their job than you are at yours. The TB12 brand continues to be so strong and he continues to own his competitors both on and off of the field.

There has been a lot of hype surrounding the upcoming edition of ‘The Match.’ On July 6th, the greatest quarterback of all-time is teaming up with Phil Mickelson to take on Aaron Rodgers and Bryson DeChambeau in an 18-hole charity golf match. Brady has been doing a lot of talking over the past few weeks.

At the end of may he tweeted a meme in reference to the beef between DeChambeau and Brooks Koepka. Just last week, he took a shot at Rodgers and his team’s decision to kick a field goal on fourth down while trailing by seven in the NFC Championship Game.

As the match comes onto the horizon, however, Brady decided to show that he’s not all talk. At least, he pretended to.

“Bryson, this is for you,” he says as he hits the first.

“Aaron, this one’s for you,” he says as he drains the second.

“Phil, this is gonna be us all day. Get used to seeing this,” he says as he drops a third.

If Brady is actually knocking in 30-footers with ease, he might as well retire from football now and join the PGA Senior tour. But he’s not.

Brady’s social team did a phenomenal job doctoring the video to make him look like a Masters champion. Watch the second putt in particular. Look it the angle at which it turns back toward the hole. Science, physics and golf itself simply cannot explain the way that ball moves and falls into the cup. It just doesn’t make sense.

Now, I hope I am wrong here.

I hope that Brady steps out onto the green next month and simply cannot miss from any distance. Nothing would be funnier than seeing Bryson get out-putt by a quarterback.

But the simple optics of this video make it very hard to believe that Brady is knocking down 30-footers back-to-back-to-back. It’s a great effort, and his social team remains top-tier, but this one is just too hard to buy into.