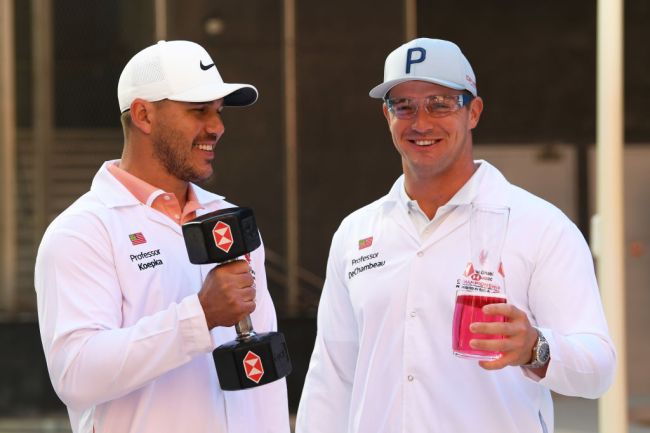 Despite the numerous storylines heading into this weekend’s U.S. Open, none were more captivating than the continued hatred between Brooks Koepka and Bryson DeChambeau. The two notoriously dislike one another and it has made for one of the most drama-filled rivalries in sports.

That back-and-forth continued on Friday.

Following a nice first-round 69 at the Open, Koepka was readying for his post-round interview with Golf Channel’s Todd Lewis. As we’ve seen before, DeChambeau just so happened to be walking by.

As he walked in the background, this time too far away to spark a reaction, he jumped into the frame and threw his hands up to videobomb the shot.

Things between the two began in 2019, when Koepka ripped DeChambeau’s slow pace of play. Last year, DeChambeau fired shots back, pointing out Koepka’s lack of abs in his ESPN Magazine Body Issue appearance.

Both golfers exchanged quips back-and-forth over the past two years, with Koepka doing a lot of the talking. The 31-year-old has hinted at DeChambeau’s potential steroid usage and threw shade at his opponent’s run-in with fire ants during a tournament last year. DeChambeau even said at one point that some of it had gone too far.

Most recently, the now-viral video of a leaked interview after the PGA Championship showed the significance of Koepka’s distaste for his rival, citing how annoyingly loud he is. Since then, the two have exchanged words back and forth both on social media and in the media. They both agree that their beef is good for the sport.

As such, the U.S. Open reportedly offered the two the chance to pair with one another over the weekend, but is reported to have DeChambeau declined. That didn’t stop him from trying to get under Koepka’s skin when he had the chance.

No bad blood was spilled from the videobomb, and neither of the two on camera even seemed to notice. DeChambeau, who shot an opening-round 73, was just trying to make light of the situation.

“Again, it is one of those things,” DeChambeau said. “People were thinking I was doing something, I wasn’t doing anything at the PGA Championship and I saw an opportunity and I just had fun with it.”

All we can hope is that both players will finish in similar standing before the weekend and will end up paired with one another by nature of their scores— especially on Sunday. Wouldn’t that be fun?