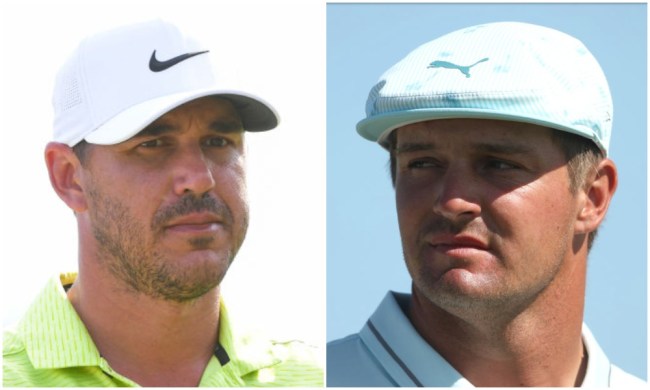 When the video of Brooks Koepka showing his disdain towards Bryson DeChambeau at the PGA Championship was leaked, everyone had the exact same reaction: the USGA better pair the two together at the U.S. Open.

It would make all the sense in the world for the USGA to do so. If it’s all about “growing the game,” embracing a legitimate rivalry in a sport that lacks drama outside the ropes and having people glued to the broadcast and social media sounds like a solid game plan.

Unfortunately, we’re not going to get that. DeChambeau is set to tee off with defending Masters champ Hideki Matsuyama and Tyler Strafaci in the first two rounds while Koepka will tee it up with Justin Thomas and Collin Morikawa.

Why the USGA didn’t pair Koepka and DeChambeau is still a very legitimate question, however.

Brad Faxon joined PGA Tour Radion on Sirius XM on Tuesday morning and shared with Michael Breed that the USGA actually did reach out to DeChambeau – the defending U.S. Open champ – and asked him if it would be ok if they paired him with Koepka. According to Faxon, DeChambeau said no.

Brad Faxon tells Michael Breed what he's heard about Brooks and Bryson possibly playing together at the US Open@BradFaxon I @MichaelBreed I @usopengolf pic.twitter.com/rhqHyh8AfN

This is a tough, tough look for both the USGA and DeChambeau.

When did the USGA start asking players for their approval of playing partners? Sure, DeChambeau is the defending champ, but the defending champ should be able to handle playing with anyone. Just because a video was leaked and there’s been some back-and-forth between the two on social media – some of which was absolutely fabricated – the USGA felt the need to seek approval for a pairing? That seems pretty soft to me.

If Faxon’s report is legitimate, this is also a pretty questionable display from DeChambeau as well. The only explanation here is that DeChambeau saw the prospect of playing with Koepka could be a distraction, so, what happens if they’re paired together on Saturday or Sunday? That seems like the only way this ends, karma striking on the weekend.

Again, if this report is accurate, the USGA and DeChambeau swung and missed.