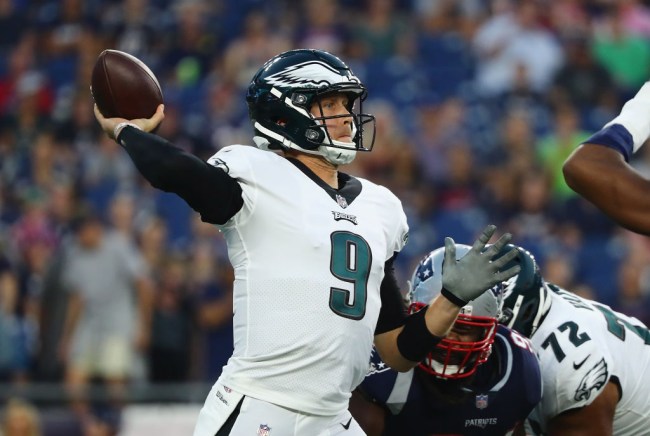 Water is wet, the sky is blue and in 2018 everyone is a troll. Even the Philadelphia Eagles equipment manager.

But that is why we keep looking that the Internet, right? If people and organizations weren’t zinging the living shit out of each other on social media, this would be a much less interesting place. A place no one would ever want to be. Except for chronic fapsters, of course.

Anyway, the Super Bowl seems like it was a lifetime ago (in Internet years it took place two decades ago), but, as we all know, the Philadelphia Eagles bested the New England Patriots 41-33. It was a great game, Nick Foles played like an absolute all-star and the city of Philadelphia finally had something go their way, other than a Rocky Balboa fight.

Last night, the Eagles went into Gillette Stadium for a mostly meaningless preseason game. The Patriots won the game 37-20, but that wasn’t before the Eagles took the opportunity to disrespect (see: troll) the Patriots on their home turf.

This was tweeted by the Eagles official social media account prior to the game.

Are these two jerseys — 41 and 33 — hanging side-by-side a happy coincidence? Or is this a premeditated troll job by one or more people within the Eagles’ organization?

And these are the toilets for tonight’s game pic.twitter.com/Tjt0xopomA

The reactions are a mixed bag.

That’s cute you guys got your first ring but do you guys remember this? T.O and McNabb sure do 😢😎 #Dynasty @Patriots pic.twitter.com/h9Ag44tM12

The whole thread of comments on Twitter is an enjoyable back and forth of Pats and Eagles fans trying to get the last word in. And look, of course the Pats have won a million more Super Bowls than the Eagles, but what good is winning a Super Bowl if you can’t be a little bit of an ass hat about it?