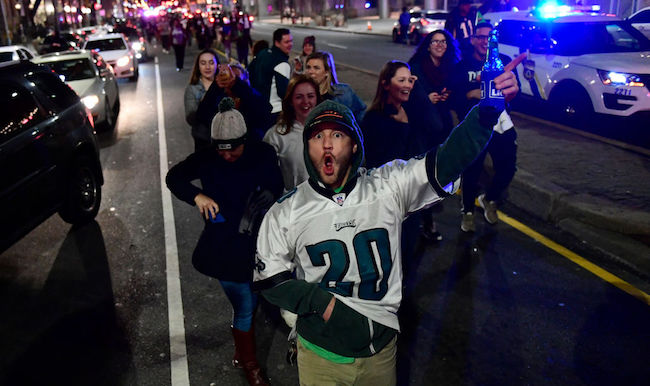 The city of Philadelphia knew it was going to have its hands full regardless of the outcome of the NFC Championship Game between the Eagles and the visiting Minnesota Vikings. Fans started living up to their reputation early in the day and only further cemented their legacy when they promptly plunged the city into chaos after securing their place in the Super Bowl.

There’s no shortage of videos documenting the postgame mayhem, and most of them feature at least one person scaling up a street lamp or a stoplight in defiance of the city officials who decided to launch a preemptive strike by coating poles around the city with grease— a move that many people viewed as a challenge as opposed to a deterrent.

The city of Philadelphia is greasing the town's light poles to prevent fans from climbing on them in the event of an Eagles win.

The city has already begun to prepare for the bedlam that’s almost sure to follow Sunday’s game, but it appears they’ve come to terms with the reality that there’s only so much they can do to control the Purge-like scenario that likely will grip Philly for a night.

On Wednesday, Philadelphia Police Commissioner Richard Ross shared the department’s plan for dealing with the inevitable crowds— a plan that does not include copious amounts of Crisco. However, he implied the force was working on a more devious solution to the pole-climbing situation like a comic book villain plotting his revenge against the superhero who humiliated him when they faced off for the first time.

I’m sure whatever solution they come up with will be totally foolproof.