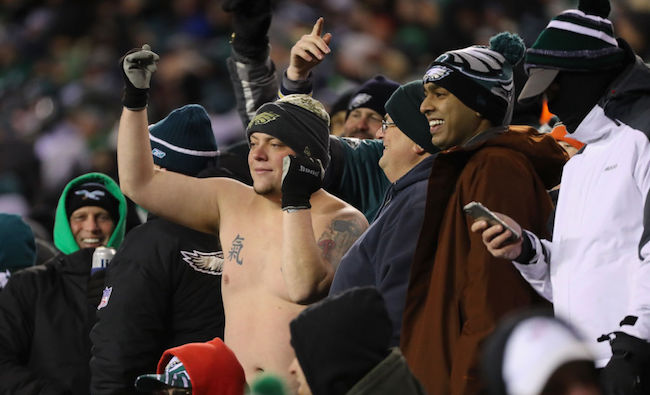 On Sunday, Philadelphia was thrust into the unavoidable chaos that came with the NFC Championship being played in the city when the Eagles trounced the Minnesota Vikings to punch their ticket to Super Bowl LII. Police did what they could to prepare for the mayhem— which was going to happen regardless of the outcome of the game—but they mostly let people do their thing after they took to the streets (minus that one incident where someone decided to punch a police horse for the second weekend in a row).

Philly fans lived up to their sterling reputation by hurling plenty of beers, batteries, and insults at Vikings supporters before the game, and the celebration they threw after the final whistle helped cement their status as one of the craziest fanbases in the NFL. Plenty of videos hit the internet showcasing the insane aftermath, and one fan compiled them in the best way possible by rounding up his favorite ones and creating a version of the intro to It’s Always Sunny In Philadelphia that sums of the spirit of the city more than the original ever could.

Put together the best clips from the past couple days the only way it made sense #GoBirds pic.twitter.com/zz9VMcG947

The video— dubbed “The Gang Makes It To The Super Bowl”— is basically the antithesis of the actual It’s Always Sunny intro, trading in shots of a beautifully lit Philadelphia for a clip of people lighting shit on fire in the streets (in addition to the clip of a dude running into a subway pole that became a classic as soon as it appeared on the internet).

I’m not sure how Philly will react if the Eagles manage to take home the Lombardi Trophy but I’m going to be sorely disappointed if I’m not treated to at least one video of someone getting stuck in a Porta Potty while tripping on acid if they do.