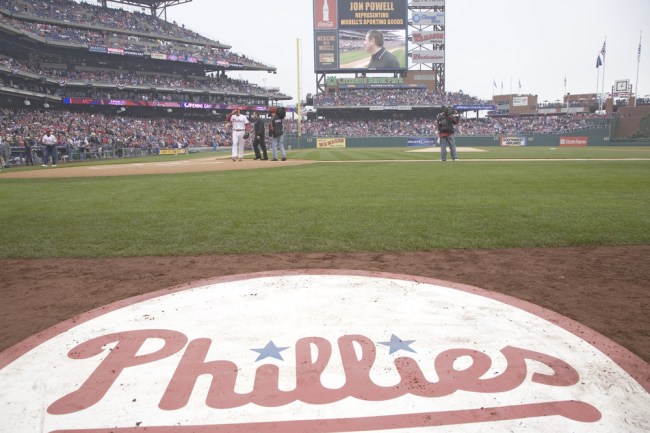 Philadelphia Phillies Left Fielder Rhys Hoskins got off to a historic start to his major league career. In 39 games this season he’s hit 18 home runs. He hit 17 in his first 33 games which is 5 more HRs than any other MLB player in history.

The dude has been straight up ELECTRIC for the Philadelphia Phillies, and a singular ray of sunshine for a team that only has 60 wins on the season and is 31.5-games behind the Washington Nationals in the NL East. Seriously, they’ve only got 1 more win than the shittiest team in the MLB (SF Giants) and without Rhys Hoskins, there wouldn’t be a single thing for Phillies fans to root for right now.

As the Phillies were going for the sweep against the Miami Marlins last week one fan, Damon Miller Jr., made a promise on Twitter to ‘buy everyone chicken nuggets’ if Rhys Hoskins hit a dinger that night. As he does in nearly every game he plays in, Rhys did hit a homer in the Phillies’ 10-0 win over the Marlins.

Most people who make a ridiculous claim like ‘I’ll buy everyone chicken nuggets‘ on Twitter would just fade into the shadows and act like nothing happened, but not Damon Miller Jr. He’s made good on his promise:

We weren’t kidding. @Damon_Miller_Jr is here to make good on his wager.

As noted on Sports Illustrated, there’s really no mention of how much out-of-pocket money Damon Miller Jr. threw down for the free chicken nuggets.

The Phillies could’ve easily had just seen his tweet and offered to bring him in to hand out chicky nugs, but I’ll choose to believe Damon got threw down some Benjamins to feed the fine people of Citizen’s Bank Park Chicken Nuggets.