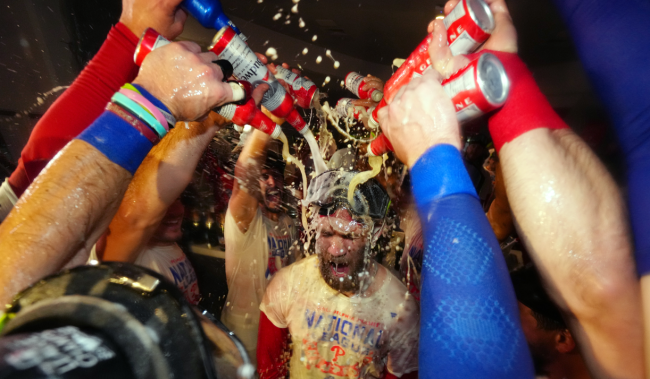 Philadelphia Phillies fans went nuts after their team earned a berth in the World Series, including one youngster who flipped off a San Diego reporter during a live shot from the city’s wild celebration.

After Bryce Harper pretty much called his shot and hit a go-ahead two-run home run off Padres reliever Robert Suarez, Phillies fans could feel it.

How is this stadium still standing pic.twitter.com/Vrhmgo6zYe

Harper and company would go on to hold that one run lead for the rest of the game, moving the Phillies on to their first World Series since 2009.

The celebration in the streets after the game saw Phillies fans climbing light poles and basically going crazy.

It didn’t even matter that the city greased the poles.

The poles have been greased! You've been warned, Phillies fans 😂 https://t.co/0ZkI1Z89Tq pic.twitter.com/n6eYpwpMbR

One of those wild Phillies fans who was caught on camera Sunday night didn’t even look old enough to remember the last time the Fightin’ Phils participated in the Fall Classic. And the game hadn’t even started yet.

Of course, this is Philadelphia we’re talking about so naturally the kid did something outrageous.

Start em young !!! We got kids on top of trucks !! I LOVE THIS CITY!!! @barstoolsports @PhillyFanLife @Phillies @SmittyBarstool @BarstoolPhilly pic.twitter.com/HzEGa6HZMo

No, that wasn’t the outrageous thing…

Before the game, Fox 5 San Diego sports reporter Julian Del Gaudio took to the streets to show some of the activities outside Citizens Bank Park. Why anyone would ever want to do such a thing is a question for another day.

During his live report from outside the stadium, a young Phillies fan with a giant smile on his face jumped into the background of the shot and flipped off the camera for all of San Diego to see. 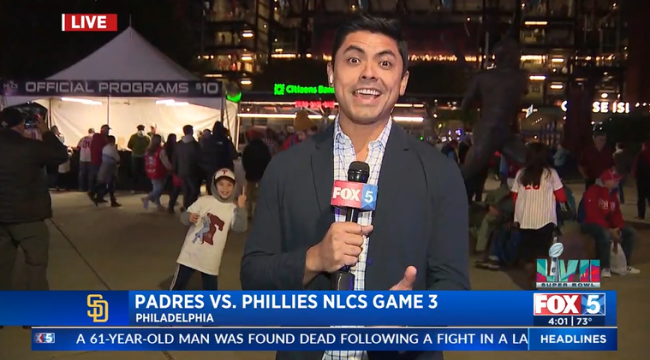 (You can watch full video of the report here.)

“Speaking of things that pop up that you wouldn’t expect, I just want to start off by saying, we apologize in advance if anything pops up that is out of our control, but this crowd is pretty raucous,” Del Gaudio said after the kid made his appearance, which was immediately followed by a very loud adult Phillies fan screaming into the camera.

Then, as the camera panned around in a full circle, our young Phillies fan made one more appearance, waving his hand and throwing up the peace sign.

“The fans, alive, they’ve been drinking a lot, by the smell of it all,” Del Gaudio added before sending it back to the studio.