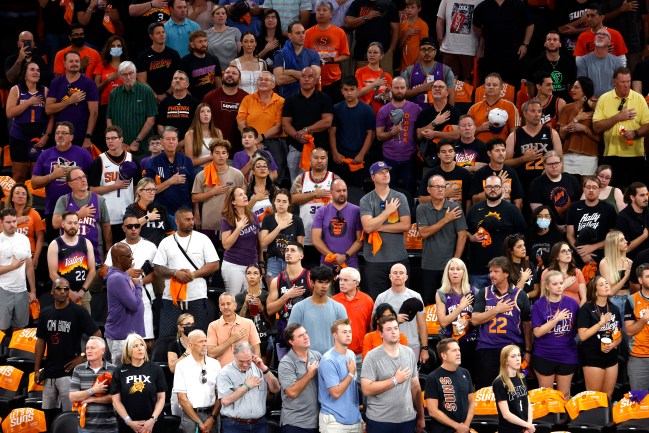 Don’t quote me on this, but by the end of the Phoenix Suns playoff run, regardless of whether or not it ends up in a title, Suns In 4 Guy will have his own TLC reality series documenting his run for mayor, which he’ll win in a landslide. He will be named Godfather to Devin Booker’s son when he’s old enough to have sex. He will be immortalized.

Suns In 4 Guy’s unlikely rise to sainthood has spurred some copycat haymakers, evident in the recent melee after the Suns Game 1 victory over the Clippers in the Western Conference Finals.

Hopefully an aberration but an expected byproduct of “Suns in Four Fan” being called a legend by Devin Booker and shirts of him being handed out pregame. Everyone is looking to be the next in line for free tickets and autographed jerseys for a viral video. pic.twitter.com/IC9hIVmMG0

Richard Jefferson expressed his concern about the precedent set by Devin Booker rewarding Suns In 4 Guy for beating the bag out of a Philly fan, to which D-Book replied mockingly.

Welp, the concern has ascended up the ranks and the Phoenix Suns organization found it pertinent to release a statement urging fans to act in a civilized manner for the remainder of the playoffs.

“The Phoenix Suns are enjoying a deep run in the NBA postseason, and while the intensity on the court continues to heat up, we still expect Suns fans to keep their cool off the court. We will not tolerate the violence that erupted following Sunday’s game at Phoenix Suns Arena. We consider Suns fans to be the best in the world. Fighting or taunting to incite violence is not reflective of our organization or how fans from across the Valley should be represented. We’re better than that. Let’s work together to provide a model fan experience that is fun, enthusiastic and respectful.”

First off, let’s pump the brakes on the “best fans in the world” sentiment. The Suns ranked 29th in the league in attendance just a couple short years ago, when attending a Suns game was sadder than a Radiohead song.

It’s about time the Phoenix Suns organization kowtows to the wants of its people. Join the revolution or it will eat you.

Shameless Self-Plug Alert: I’ve started an Instagram news Series called The Friday 5 at 5, detailing the five best stories of the week with piss poor graphics. New installments release every Friday at 5. Give a like and I’ll buy you a Heineken.