Pierre-Emerick Aubameyang Embodies The Spirit Of Arsenal, Takes A Literal Dump In The Middle Of The Game 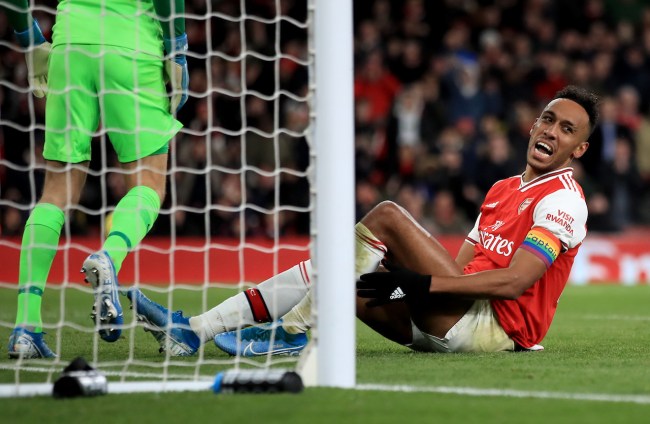 Whether or not you follow soccer, a story about a highly paid professional athlete having to drop a fresh deuce in the middle of a game is a story that can be enjoyed by all, so take a seat and gather ’round the footie campfire, both my soccer-watching and non-soccer watching brethren.

Before we get into the physical shit, though, we must first discuss the metaphorical shit that is Arsenal Football Club right now.

Arsenal, a once-proud London-based football club famed for the days of Thierry Henry and Arsene Wenger, are an absolute dumpster fire these days, as they’ve not only fired their manager — Unai Emery — but have actually looked worse since doing so, which is antithetical to what’s known as the “new manager bounce.” For American sports fans, it’s similar to the Ewing Theory: addition by subtraction.

Over the weekend, the Gunners barely eeked out a draw against likely relegation-bound Norwich. Then, on Wednesday, they lost to middle-to-low table, generally hovering around the relegation zone Brighton at home for the first time ever. The team is literally setting records with their poor play, as this is the longest winless streak they’ve endured since 1977.

Arsenal and Everton should play a Best-of-7 and loser gets relegated.

And yet, that’s not even the most ridiculous fact about yesterday’s game. No, the most ridiculous thing about Arsenal’s historic Emirates loss to Brighton is that in the 85th minute, club talisman and captain Pierre-Emerick Aubameyang walked off the pitch to take a shit. In the 85th minute — as Arsenal was desperately chasing a goal — which he is paid to score — to salvage a still-embarrassing home draw

Arsenal’s interim head coach Freddie Ljungberg has admitted that he was surprised by Pierre-Emerick Aubameyang’s decision to take a toilet break during the final minutes of their defeat against Brighton & Hove Albion in the Premier League on Thursday.

The incident happened in the 85th minute, as Arsenal were still trailing 2-1 and chasing an equalizer if not a winning goal as well – and as Aubameyang left to attend nature’s call, the Gunners had to fight with just ten men on the pitch. The reason for Aubameyang’s untimely exit emerged only after the game, and Ljungberg said he was unaware of the situation when it actually happened.

“He ran off and came back two or three minutes later. If you feel bad you feel bad, it’s nothing you can change. I actually didn’t even notice he went off, I just saw him come back on after he’d been off for a couple of minutes.” [via Fox Sports]

Look, I understand the ethos of “when nature calls”, but this is a man who has been a professional athlete for a majority of his life — he should know how to manage his diet on gamedays. Fuck was he doing, having some fish, chips, and a cheeky pint at halftime? And not only that, but there were only five or so minutes left in the game. Literal children are able to hold out for that long, and they aren’t being paid millions of dollars to do so, either.