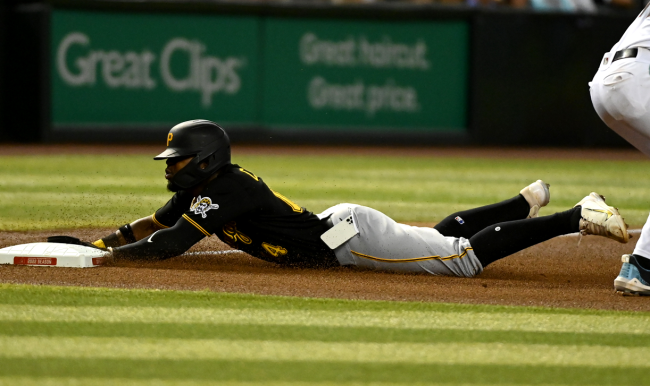 Just when you think you’ve seen everything there is to see in sports, Pittsburgh Pirates infielder Rodolfo Castro goes and loses his phone while sliding into a base.

Yes, this is a thing that actually happened.

Castro, who was called up from Triple-A Indianapolis by the Pirates on Tuesday, made quite the impression after walking to get on base in the fourth inning.

Racing to third base on a bloop single into left-center by teammate Oneil Cruz, Castro slid headfirst into the bag. The jarring slide caused his phone, which was inexplicably still in his back pocket, to fly out on to the field of play.

Castro was made aware of this fact when third base umpire Adam Hamari pointed out that his phone was on the ground near the base. Castro then retrieved his phone and handed it to third base coach Mike Rabelo.

This is a first… Rodolfo Castro's phone fell out of his pocket in the middle of the game 😅 pic.twitter.com/qaPd34qroF

“I just remember getting dressed, putting my pants on, getting something to eat, using the restroom. Never did it ever cross my mind that I still had my cellphone on me,” Castro told the media. “I went out there, put my sliding pad in my pocket, never felt my phone, and just went out there and what happened, happened. To be honest with you, I don’t think there’s any professional ballplayer that would ever even go out there with any intentions of taking a cellphone.

“It’s horrible that it happened to me. Obviously, it was very unintentional,” he continued. “I didn’t do this at all in any way or form. It’s something I didn’t even know I had on me, and to be completely honest with you, I feel horrible. The last thing I wanted was to be the center of attention in this form. Obviously, coming right back, getting called up again, my first day back, if I was to be the center of attention, I would want it to be helping the team win, but never in this form. This is definitely something that was an accident, a mistake, something I’m going to learn from, but definitely something that I didn’t mean to happen.”

At least Castro’s phone flying out of his pocket distracted Pirates fans from the fact that, after Tuesday’s loss, the team is now 44-66 on the year.

Rodolfo Castro on the Pittsburgh Pirates with his phone falling out of his pocket sliding into 3rd base, what in the world. Bad News Bears, Pirates edition pic.twitter.com/U7dm8XR4Pg

I'm going to be writing about how Rodolfo Castro's phone fell out of his pocket, which should be an indicator of how this game went. Michael Chavis went yard twice.

I luv how the phone hits Rodolfo in his left hand, but he gets up, pretends he's locked into the game situation, darting his head back & forth several times like he doesn't notice phone on ground b4 ump points out the obvious, lol. I guarantee he knew his phone fell out, ha.

Do players get suspended when using digital devices still doesn't lead to wins?

U can give the pirates all the Competive advantages you want they are not going to reach .500