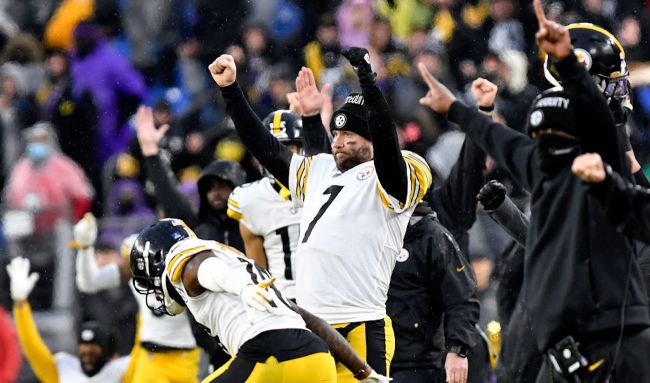 Thanks to the Indianapolis Colts’ wildly embarrassing loss to the Jacksonville Jaguars, the Pittsburgh Steelers — who beat the Baltimore Ravens in overtime to improve to 9-7-1 — went into Sunday night’s regular season-concluding game between the Los Angeles Chargers and Las Vegas Raiders with an excellent chance of making the postseason, as all they needed was for either of the teams to win the game.

However, because nothing is ever easy in the National Football League, Steelers fans were put through the wringer as the Chargers-Raiders game not only went into overtime but was not decided until the final second of the game, with the Raiders ultimately winning thanks to a Daniel Carlson field goal.

Throughout the course of the game, Steelers fans took to Twitter to share the rollercoaster of emotions they were experiencing as their 2021 playoff berth was hanging in the balance:

The Steelers squeezing into the playoffs pic.twitter.com/WbL34sXBdq

With the Raiders’ victory over the Los Angeles Chargers, the playoffs are now set and will begin on Saturday at 4:30 p.m. when Las Vegas, the No. 5 seed in the AFC, heads to Ohio to take on the No. 4 seed Cincinnati Bengals. Saturday’s slate will then close out with a bout between AFC East Rivals, as the New England Patriots (No. 6 seed) make the trek up to the Buffalo to take on the Bills (No. 3 seed).

On Sunday, the NFL playoffs will continue when the No. 7 seed Philadelphia Eagles face off against the No. 2 Tampa Bay Bucs in the 1 p.m. slot. The following game will see the No. 6 seed San Fransisco 49ers take on the No. 3 seed Cowboys in Dallas, followed by the No. 7 seed Pittsburgh Steelers visiting the No. 2 seed Chiefs in Kansas City. Finally, on Monday, the No. 5 seed Arizona Cardinals will head up to Los Angeles to take on the No. 4 seed Rams for the third time this season to close out Wild Card Weekend.