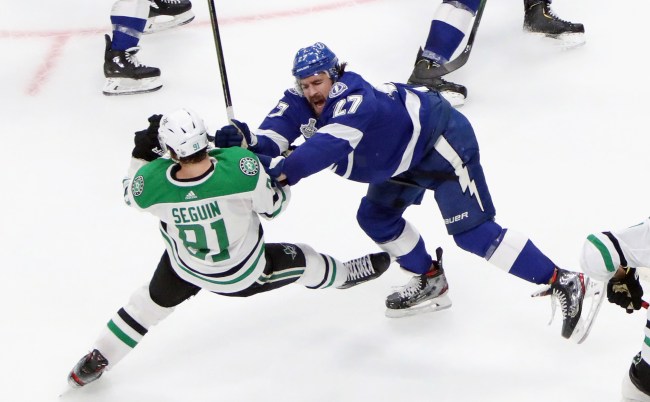 NHL players have been living in some sort of a ‘bubble’ for a LONG time. I’m a Tampa Bay Lightning fan and my team played their first bubble game, a 5-0 win against the Panthers, on July 29th. We are now a week away from October.

The NHL initially sold teams and players on this private fantasy land with outdoor lounges, fly fishing trips to the mountains, regular golf outings, standalone shops built for them, and it was all presented to them in a packet. Players bought into what the NHL was selling but did the league deliver? In short, no. First and foremost, however, the NHL kept the players safe. Out of 32,374 tests over the span of 8 weeks there have been zero positive tests.

ESPN’s Emily Kaplan and Greg Wyshynski spoke with NHL players inside of the bubble to ask them what life has been like over the past few months. The players chose to remain anonymous but they shared details on partying at the ‘club’ in Toronto, eating gummies and edibles, room service, sex, and if the NHL delivered on those fly fishing and golfing excursions that were advertised.

Here’s what the players had to say about their feeling of safety:

“Security was very tight,” one Western Conference player said. “For all the guys that were questioning how safe it would be, that quickly went away. It was one of the safest places you could be. They were constantly checking your credentials, constantly checking our Clear App, constant security. In that sense, they did a really good job.”

One Eastern Conference player said the testing made him feel “at ease,” which was reinforced by “mask police everywhere” inside the bubble.

Another Eastern Conference veteran said mask culture, which was prevalent, was about “internal respect” as well as “optics.” (via ESPN)

The ‘optics’ refers to players constantly being on camera everywhere they go. There’s a sense that if they’re seeing breaking the rules then some kid in Saskatoon thinks it’s cool to not wear a mask. But the fences surrounding the bubbles did foster a sense of claustrophobia in some players.

“The fence that boxed us in, that made you feel like you were in more of a prison, kind of like an animal,” he said. “Just the feeling of it. There’s no other way to separate you from the outside world in a safe way, but it was an eye-opener when guys pulled up to the hotel.”
An Eastern Conference veteran called it “a safe zone, totally separate from the outside world” in Toronto. “I almost felt too secure. With the fences they put up, there was no way anyone was getting in or out,” he said.
In other words, the pre-bubble speculation regarding “prison breaks” by players seeking some fun outside the bubble were greatly exaggerated. (via ESPN)

Did the NHL deliver on the promises it made of food trucks, excursions, shopping, families allowed into the bubble, and something that generally resembles daily life back home? Not according to the players, no. It sounds like there’s a little resentment there but at the same time a lot of the players quickly acclimated to the bubble and were there to win The Cup.

“The things promised and actually delivered [on] are hilarious if you look at it,” said one Eastern Conference veteran who was a member of the return-to-play/CBA committee. “They gave us a proposal for Toronto, which was this booklet that I circulated among my teammates. I was like, ‘Whoa, this is going to be actually nice.’ They had food trucks, restaurants, shops out in the middle of the street for us to go shopping. When we got there, the guys were like, ‘Where are the shops? Where are the outdoor team lounges?’ Yeah, none of that.”

A Western Conference veteran was dazzled by “all these restaurants to eat at, all these food trucks, all these excursions, families were going to be there.” But after weeks in the bubble, “it just felt, to a lot of players, that they made all these promises to get us there and didn’t really want to follow through with them and made it as hard as they possibly could to do these things. It’s just annoying, that’s what it is.” (via ESPN)

One player said certain teams had it better than others based on their bubbles. They claim Montreal had wraps and smoothies while Florida got none of that. Some teams got roof decks while others got nothing. Some hotel rooms in Edmonton didn’t have windows to the outside world and the only place to get fresh air was a concrete oval in the middle of the hotel.

What about those excursions that were mentioned? Tampa Bay did go golfing. Once. But it required every single player on the team to go play golf and it all had to be done at a very specific time. Fly fishing has become the running joke because not a single player has been able to go and the mountains were hours away from the bubble.

Even playing golf was a hassle,” one Western Conference player said. “You have to set up a golf time. It has to be an exact time, but it has to be everybody or nobody. Realistically, what team is going to set up a full-team golf outing between Games 3 and 4 in the second round?”

It wasn’t just the lack of golf trips that irked players. “They promised us excursions: ‘Oh, we’re going to have fly fishing and golf, a golf course just for us — you can go whenever you want — and a field,'” a Western Conference player said. “We went to the field one time. It was a fight to even golf once. And please let me know if you talk to anyone who went fly fishing.” (via ESPN)

The NHL and NHLPA initially promised that the players’ families could join the bubble for the Conference Finals and the Stanley Cup Finals but they squashed that idea and cited the Canadian government wouldn’t give them the exemptions required to bring in any families who weren’t already living in Canada.

Some players were resentful of the NBA’s bubble in Orlando which provided school and other activities to keep kids entertained and occupied for an extended period of time while the dads played basketball. The NHL didn’t do any of that and the option for Canadian families was to drive to Edmonton in the middle of nowhere or charter a flight for like $50K.

What about the partying?

Players had access to a concierge service in the lobby, and they could order beer and wine and have it delivered to the team rec rooms. Hotel X in Toronto featured SkyBar, which is where players from several teams converged on a nightly basis.

“I’m not kidding you when I say that at least 10-15 guys from every team were up there,” one Eastern Conference player said. “If a team was playing the next day, you didn’t see any of those guys at the SkyBar. It would be teams playing the following day or after their games. It wasn’t just the fourth-line guys or just the top-end players. The stars, the young guys, everybody was there.” (via ESPN)

But what exactly was going on? Sex, drugs, and Rock-n-Roll? Not really. Just some casual drinking when the players didn’t have a game the next day and it sounds like gummies/edibles were used but mostly for recovery and not to get high.

As with drinking, things seemed to be in moderation in the bubble. “Weed gummies were there, drinking was there, but I think when it came down to it, people were trying to perform the best they can,” a Western Conference veteran said. “I don’t think guys were drinking to party — certainly not in excess. When guys were taking weed gummies, it wasn’t a ‘Let’s get high as s— and do nothing all day.’ It was more of a recovery sense or to fall asleep after a game. Instead of falling asleep at 4 or 5 a.m., guys could fall asleep at 1 a.m. so they could get seven hours of sleep.” (via ESPN)

What about sex in the bubble? According to the anonymous players there was none, at least none that anyone discussed. Nobody wanted to be the guy that ruined the bubble for everyone and mess things up.

“There was some chatter before it started about guys trying to leave the bubble or sneaking girls in. There was none of that going on. Guys were pretty mature. Ultimately, you didn’t want to be the guy that f—s this up, to be the one that ends up getting everyone COVID,” one Eastern Conference veteran said. “Everybody is getting tested every day. So I think guys were almost too scared that something might happen, and then they get caught. Everyone knew what floors every team was on. If someone was going to a certain floor, it was pretty easy to figure out what team they were associating themselves with.” (via ESPN)

The players also discussed their daily diets. It sounds like some of them were eating steak every single day and crushing room service like it was their job in life. I get it. I’d lose my mind if I was forced to isolate in a hotel room for several months and I’d be eagerly looking forward to anything exciting away from the arena.

Some guys racked up room service bills in the thousands.

It does sound like life has been odd when they’re all living in such close proximity to their sworn enemies. My Tampa Bay Lightning are THREE WINS away from hoisting the cup. Or three losses away from a devastating loss to the Stars. And they’ve been pushed to overtime in every series-clinching game they’ve played. They also went to 5 OTs for the 4th longest hockey game in NHL history in their FIRST game of the playoffs against Columbus. And they’ve all been living side-by-side with each other.

“If something happened in a game and you see the guy in the hotel, you’re like, ‘F— off, buddy,'” an Eastern Conference veteran said. “Now, you’re not going to say anything in the elevator, but you both know. But whether you were a fourth-line plug or you’re running the power play, you were there trying to play hockey and finish this. You were trying to make it as legitimate as you could. So while there was [tension], there was also a sense of, ‘Hey, guys, let’s make the best of it.'”

Added an Eastern Conference player: “It was hard because during a playoff series, I want to rip these guy’s f—ing heads off on the ice. I don’t want to have to mingle with them the next day. So that created some interesting moments. Lots of averted eye contact, to be honest.” (via ESPN)

The whole article is pretty fascinating. I’ve cherry-picked my favorite parts but there are some interesting quotes on how players foresee next season going. What playing the games have been like in empty stadiums.

You should definitely head on over to ESPN to read the article in full. And tune in to NBC Sports at 8pm tonight to watch the Lightning win game 3 of the Stanley Cup Finals against the Dallas Stars.