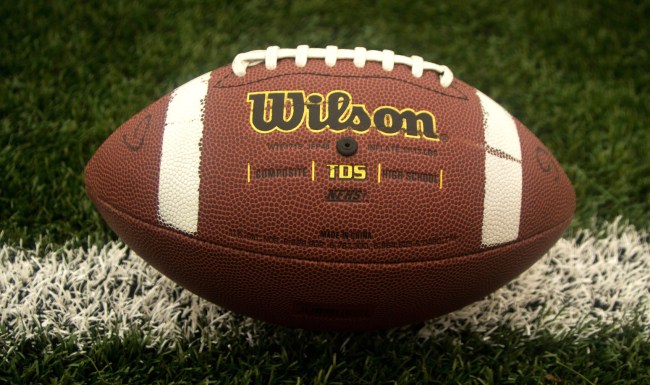 Have you ever been so excited by succeeding at something that you kind of lost track of where you were and what you were doing at that moment? Because that’s basically what happened this past weekend to a high school football player from Fairfield High School in California when he intercepted a pass and took off running… the wrong way.

During Friday’s high school football game between Fairfield and Rodriguez, a Fairfield defender made a sweet interception and thought he was going to turn it into an even better pick six. The reason, however, that the field was so wide open in front of him was because he was running towards his own end zone about to turn that pick six into a safety for Rodriguez.

At least that was the case until his teammate Kha’Ron Thrower realized what was happening and sprinted a good 50 yards to tackle the runaway interceptor around the 10-yard line, saving the day.

Spots center not top 10 and Top 10???? I saved the game with the tackle, teammate ran the opposite way off the interception🤷🏽‍♂️🤷🏽‍♂️😂😂@BleacherReport @SportsCenter @houseofhighligh @overtime @ScottVanPeezy @RandyMoss pic.twitter.com/DjSSFy2hTf

According to Thrower, the player who picked off the pass was indeed so excited at his great play, his first career interception, that he just got turned around and didn’t realize what he was doing.

My youngin it was his first high school pick, all he was thinking was I’m finna go get 6😂😂

He was in disbelief but it was his first high school interception and the crowd was cheering as he ran the wrong way, he felt bad and after the game he thanked me for the tackle®

That was lil bro first interception noted that he’s only played 2.5 games do to injury going into that game and that was his first game back off another injury so I don’t really blame him and that had nothing to do with us losing, lil bro fine and he’ll bounce back 🖤®@ohnoitsab

Unfortunately, the interception, and Thrower’s amazing tackle, weren’t enough as Fairfield ended up losing the game 14-7, falling to 0-7 on the year.

Oh well, at least they’ll have a memory from the season that will last a lifetime.

@ohnoitsab look bruh you made it 😭😭it coulda been worse if I ain’t tackle you lil bro🖤🤦🏽‍♂️® https://t.co/KcjJKD738y

I love you bro, we gone live this up forever you definitely owe me for this and my gloves kid🖤🤦🏽‍♂️®

My awareness definitely a 99 off that®

Do I get points from stopping him prime???®

Was that u man? https://t.co/GWdd1WGHHG