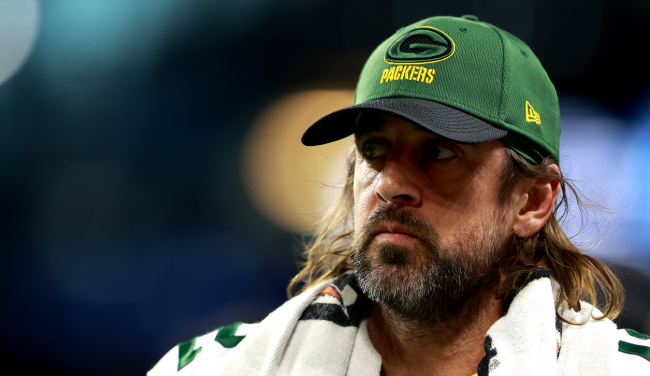 Last week, video from the event went viral because one of the students playing against Aaron Rodgers, Wheeling University football commit Darius Maxwell, picked him off then walked up to the quarterback and handed him the ball.

Rodgers appeared to jokingly take offense to the move and fired the ball in Maxwell’s direction.

This week, Maxwell, who was at the charity event with some of his Saddleback College teammates, was on a team captained by former NFL quarterback Carson Palmer.

Darius Maxwell may have picked off Aaron Rodgers, but the NFL MVP paid him back

During the games, Maxwell tells PackersNews.com, there was much trash talking taking place.

“They’re like, ‘Oh, if we was in pads we’d beat y’all.’ It was just a lot of talking. It was intense,” Maxwell said about the game versus a team captained by ex-NFL QB Mark Sanchez. “So that game, that game was very intense. I had three picks that game.”

In the game versus Aaron Rodgers’ team, Maxwell said, “The whole day I was playing zone. I wasn’t trying to play too much man ’cause I don’t play DB. So I was just backing up in my zone, I saw the corner route coming. ‘Cause I play receiver, so I know when they’re in certain positions, what route they’re running.

“They ran a bunch play, I was like ‘watch the corner route, watch the out route, then watch the crossing route.’ I literally called it out,” Maxwell continued. “So I just backed up on the corner, came back to the pivot route then came back to the corner. I just knew it, I hid behind the receiver. I didn’t fully go to him, I just sat behind him a little bit, played him … just, the IQ, just been playing football my whole life.”

After picking off the NFL MVP, Maxwell says he just did what comes naturally.

“I’m telling you, I’m from Florida so when we play 7-on-7, we hand the ball back, we punt the ball after an interception. We throw the ball to the other side. … In that moment, I can’t tell you why I did it, I was just excited. ‘Here you go, thank you for the ball.’”

Oh, and what the viral video doesn’t show is Aaron Rodgers beating Maxwell deep with a no-look pass on the next series.

“It was nice, it was very nice. Pure (Aaron Rodgers). You can’t stop it. It was nice,” Maxwell said.