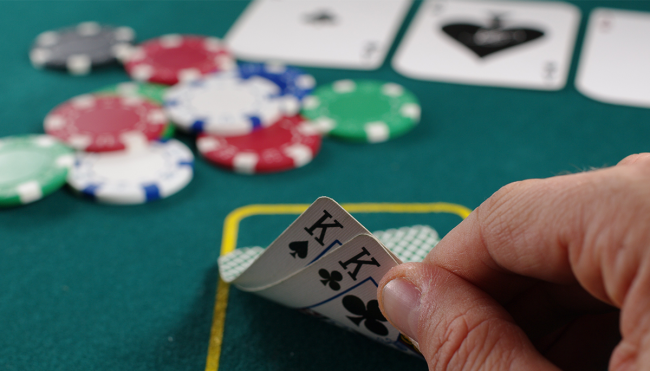 There was a brief period of time in the early 2000s where a huge chunk of the population convinced themselves they were really good at poker. However, most of them eventually realized that there’s a big difference between sitting down with a few buddies for a game with a $20 buy-in and facing off against the tiny sliver of the population that’s actually good at poker (which usually comes with a significantly higher price of admission.)

The poker world has gradually gone back into the shadows after it was thrust into the spotlight when ESPN helped the World Series of Poker take the world by storm, but it’s still the source of some particularly wild moments and stories—including the absolutely wild series of events that unfolded during a Texas Hold ‘Em game in the state that variation takes its name from last week.

On Friday, a couple of players competing in the Lone Star Poker Series at the Champions Poker Club in Houston found themselves going head to head after Troy Clogston went all-in with a pair of jacks and saw his bet called by Don Iyengar, who had a third jack in his hand in addition to an ace.

Clogston casually predicted the flop would be 8-9-10 before the dealer flipped over those very cards in the exact same order, which kicked off one of the most unlikely runs you’ll ever encounter.

After correctly guessing the turn would be the Four of Spades, the outcome of the hand became an afterthought as the table waited with bated breath to see if Clogston’s prophecy that the Two of Hearts was coming up on the river would be fulfilled—and reacted appropriately by freaking out when it was.

I’m sure there are some nerds out there who can calculate the exact odds of this happening, but it’s safe to say the chance of Clogston actually pulling off this feat was unfathomably small. Part of me feels this might just be an April Fools’ Day joke that came four weeks too late, but I want to believe and will continue to do so until proven otherwise.