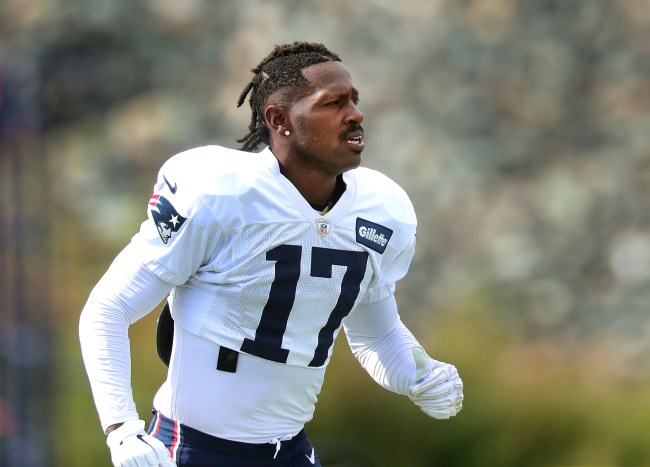 Antonio Brown has found himself in some serious hot water after he allegedly physically assaulted a moving truck driver.

This afternoon, police issued a warrant for Brown’s arrest for felony battery and burglary.

There is no bond. pic.twitter.com/CZpkHbrbZz

According to court documents, Brown allegedly refused to pay $4k that was owed to a moving truck company that transported his belongings to Hollywood, Fl from California. The moving truck driver them says AB began throwing rocks at the truck and caused vehicle damage.

TMZ Sports has obtained court docs in the AB alleged assault case in which the moving truck driver describes why Brown and his trainer attacked him during a routine drop-off Tuesday at Brown’s Florida home.

The driver claims he was hired to deliver belongings AB had stored in California — but when he arrived and demanded his $4,000 payment, Brown refused to hand over the cash.

The driver claims he tried to leave the home (with AB’s property still in his truck) but Brown picked up a rock and threw it at the vehicle causing a dent and a paint chip on the driver’s side door. The driver called police to report the vehicle damage.

The driver then eventually went back to the house after Brown agreed to pay $4k and an additional $860 to cover the damages. According to the driver Brown only paid $4k but then later refused to pay for the damages he had caused. An argument ensued and Brown apparently got physical with the driver.

A short time later, the driver was contacted by the moving company and asked him to go back to Brown’s home to redeliver the goods … telling him Brown was willing to make the initial $4,000 payment PLUS an additional $860 to cover damage to the truck and the extra work time.

Upon arrival, the driver claims AB gave him the $4,000 but refused to pay a cent more — so again, they argued. But, this time, the driver says Brown forced his way into the driver’s side of the main cabin and began to physically strike him.

The driver goes on to say that Brown and his associates began unloading stuff in the truck, some which didn’t belong to him until the police showed up.

Brown’s associates eventually restrained the NFL star. The driver claims AB’s trainer, Glenn Holt — a former NFL player — grabbed the keys from the ignition and opened the side of the truck so Brown could unload his belongings.

hile AB and his pals were unloading the truck, the driver says he told the group they were taking property that belonged to another client … so they tossed it back in the truck, causing damage to the items.

When cops eventually arrived, they found AB sitting at his front door but when he saw officers, he retreated inside and shut the door. Cops say they tried to make contact with him “with negative results.”

Brown responded to being wanted by police by claiming that certain people are trying to “slander his name”.

They want my name slandered