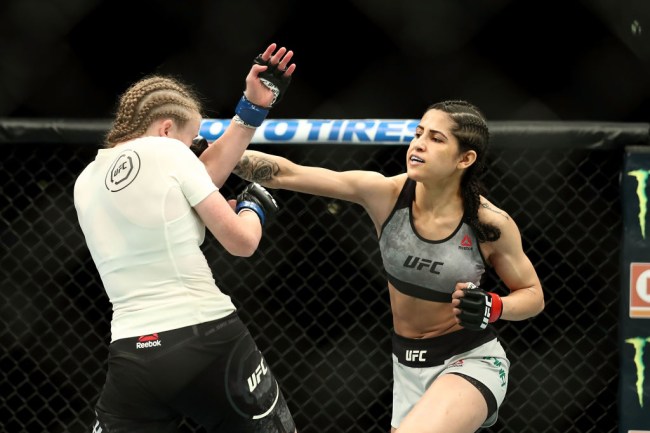 If you’re thinking of robbing someone, don’t. That’s their shit. Get your own shit. But, if there’s no stopping you, at least let me offer you this tiny tidbit of advice: make sure the person you’re robbing, male or female, doesn’t beat people up for a living. That will add an element to your criminal endeavor that could end very poorly for you, and I have the pictures to prove it.

On Saturday night, a grown man nestled up to Brazilian UFC strawweight Polyana Viana while she was waiting for an Uber in front of her apartment complex in Jacarepagua, a neighborhood west of Rio de Janeiro.

Viana, who is 10-2 MMA, 1-1 UFC, described to MMA Junkie how the situation escalated in the blink of an eye.

“When he saw I saw him, he sat next to me,” Viana said. “He asked me the time, I said it, and I saw he wasn’t going to leave. So I already moved to put my cell phone in my waist. And then he said, ‘Give me the phone. Don’t try to react, because I’m armed.’ Then he put his hand over (a gun), but I realized it was too soft.

“He was really close to me. So I thought, ‘If it’s a gun, he won’t have time to draw it.’ So I stood up. I threw two punches and a kick. He fell, then I caught him in a rear-naked choke. Then I sat him down in the same place we were before and said, ‘Now we’ll wait for the police.’”

On the left is @Polyana_VianaDF, one of our @UFC fighters and on the right is the guy who tried to rob her #badfuckingidea pic.twitter.com/oHBVpS2TQt

She continued by saying that once the man felt her wrath, he realized he’d made a bad decision.

“I was fine,” Viana said. “I was fine because he didn’t even react after. Since he took the punches very quickly, I think he was scared. So he didn’t react anymore. He told me to let him go, like ‘I just asked for the time.’ I said, ‘Asked for the time my ass,’ because he saw I was very angry. I said I wouldn’t let go and that I was going to call the police.

“He said, ‘Call the police, then’ because he was scared I was going to beat him up more.”

According to MMA Junkie, Polyana would find out later that the “gun” he was holding was just a cardboard cutout in the shape of a handgun.

Imagine being in the clink and having to tell your cellmate that you got beat to a pulp by a woman who you tried to rob with a cardboard gun. That’s a tough one to spin.