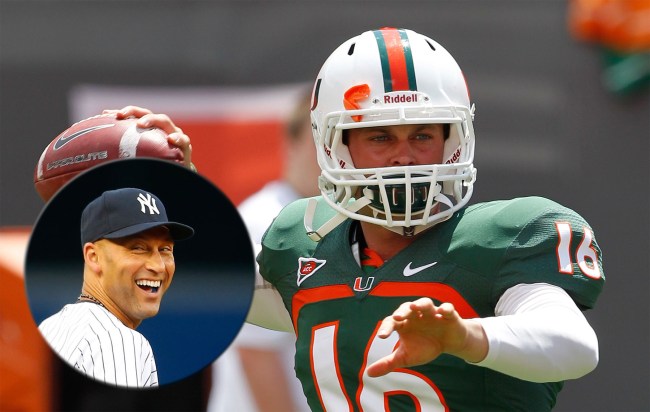 Garrison Lassiter of West Forsyth High School in Clemmons, North Carolina was drafted by New York Yankees in 27th round of 2008. He signed with the team for $675,000. Pretty damn good deal for a 27th round draft pick. On June 22, 2012, Lassiter was released by the New York Yankees.

In 2019, according to a lawsuit just unearthed by NJ.com, Lassiter thinks that the Yankees owe him $34 million.

Oh, and he blames Derek Jeter for wrecking his pro baseball career, of course.

Let’s back up a little bit before delving into the completely insane lawsuit Lassiter filed.

After being dumped by the Yankees in 2012, Lassiter, at the age of 23, signed with the University of Miami Hurricanes in 2013 to play quarterback.

Lassiter was with the Hurricanes for one season as a reshirt and never played a snap, then left the team, claiming he was kicked out of the program “for rallying the team and asking head coach Al Golden to make him the starter,” according to NJ.com.

Got all that? Okay, good. On to the mind-boggling lawsuit filed by Lassiter against the Yankees in 2019.

In the lawsuit, dismissed by a judge in May, Garrison Lassiter used letters, newspaper clippings and scouting reports to weave a strange tale of conspiracy that he said was launched against him “to protect the career of Derek Jeter.” He alleged that it was “blantanly (sic) obvious” that Jeter controlled the Yankees organization, and he insisted Yankees employees libeled and slandered him to other teams, preventing him from reaching the major leagues.

The reason? “To protect the career of Derek Jeter.”

Lassiter, who acted as his own attorney after putting himself through law school, said he is broke and has had to sleep in his car, having gone through the $675,000 signing bonus the Yankees gave him in 2008. According to the lawsuit, Lassiter, now 30, sued the Yankees because he wanted to get what he deserved “for the interference and lost years” of his pro career.

“I cannot get on the field due to the New York Yankees trying to control my career,” he wrote in all caps to several major league teams, looking for deals that never came. “I’m the only Baseball Player that will stand up to the New York Yankees,” he added in the final page of the document, which was filed in U.S. District Court for the Middle District of North Carolina.

So, basically Lassiter thinks he got f**ked by Jeter and didn’t even get a parting gift basket.

And just to drive the point home that he is delusional AF, Lassiter also sued the Cincinnati Reds for $1.635 million (the equivalent of three years worth of minimum salary in MLB) on December 30th.

11 days prior to that he sued Proehlific Park, a training complex owned by former NFL wide receiver Ricky Proehl, because the facility didn’t get him a tryout with an NFL team.

Lassiter also previously wrote unhinged letters to the Texas Rangers general manager and another letter to the Kansas City Royals general counsel complaining about being held back by the Yankees.

As for how he came up with the $34 million figure? That’s another doozy.

In the lawsuit, Lassiter says he is a mix of Corey Seager and Brandon Weeden. Seager made $17.468 million, Weeden made $11.598 million (according to Lassiter’s “guesstimate”), and another $5.6 million for the basketball career he was unable to achieve.

Seems reasonable to me.