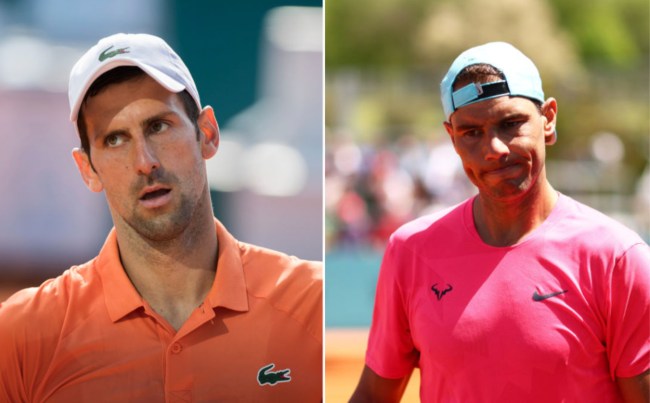 Two months prior to the start of Wimbledon, organizers of the grand slam decided to ban Russian and Belarusian players in light of the war in Ukraine. Rafael Nadal and Novak Djokovic, among other players, do not agree with that decision whatsoever.

Wimbledon came to its decision to ban players from the two countries because it didn’t want to “benefit the propaganda machine of the Russian regime.”

It’s certainly not Russian and Belarusian-born tennis players’ fault that Russia attacked Ukraine, which is how Nadal is looking at the situation as well.

“I think it’s very unfair (on) my Russian tennis mates, my colleagues,” Nadal said in a press conference on Sunday ahead of the Madrid Open. “It’s not their fault what’s happening in this moment with the war.”

“I’m sorry for them, Wimbledon just took their decision … the government didn’t force them to do it,” he said, according to MSN.

Djokovic on the other hand knows what it’s like to be banned from a grand slam. He was excluded from the Australian Open due to his unvaccinated status. The Joker will be allowed to compete at Wimbledon, however.

“It’s not the same thing, but going through something similar earlier this year for myself, it’s frustrating knowing that you’re not able to play,” Djokovic said.

“I still stand by my position that I don’t support the (Wimbledon) decision. I think it’s just not fair, it’s not right, but it is what it is.”

The ATP and WTA have both expressed their disagreement over the ban of players at Wimbledon as well. Both have reportedly discussed the possibility of removing ranking points from Wimbledon over its decision.

Wimbledon Not Bending Despite Harsh Criticism

Tournament chairman Ian Hewitt floated the thought of Russian and Belarusian players being allowed to play if they sign declarations against the war.

“Even if we were to accept entries from Russian and Belarusian players with written declarations, we would risk their success or participation at Wimbledon being used to benefit the propaganda machine of the Russian regime, which we could not accept,” Hewitt explained last week.

Andy Murray explained why that wouldn’t make much sense, and could very well put families in harm.

“My understanding of the guidance was that Russians and Belarusians can play if they sign a declaration that they’re against the war and against the Russian regime,” he said to journalists at the Madrid Open.

“I’m not sure how comfortable I would feel if something happened to one of the players or their families (as a result).”

Wimbledon is set to begin on June 27.