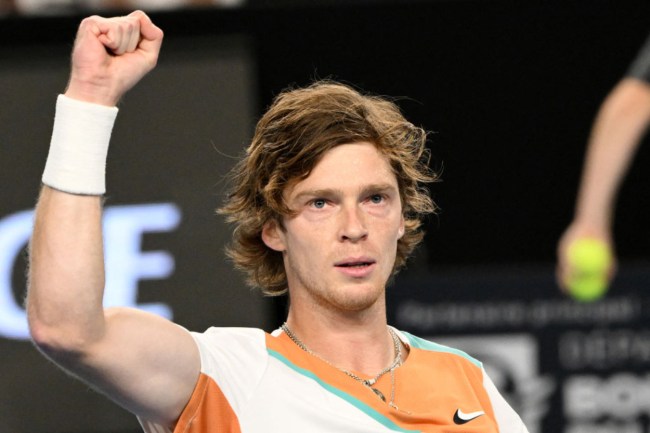 Russian tennis player Andrey Rublev advanced to the final of the Dubai Championships on Friday, but his mind was back home. After the three-set thriller, Rublev walked over to a camera and wrote “no war please” across the lens.

Rublev’s message comes just a couple of days after Russia began invading Ukraine. For him to deliver that message so publicly on a world stage as his country attacks another takes tremendous courage.

You can see the seriousness on his face as he writes the message in the video below.

Russian tennis player Andrey Rublev writes "No war please" on the camera following his advancement to the final in Dubai. pic.twitter.com/GQe8d01rTd

Rublev isn’t the only Russian tennis star to speak against his country’s actions against Ukraine.

World No. 1 Daniil Medvedev spoke to the media on Thursday at the Mexico Open. He woke up to the news that morning and explained that he is “all for peace.”

“Watching the news from home, waking up here in Mexico, was not easy,” Medvedev told the Associated Press. “By being a tennis player, I want to promote peace all over the world.”

“We play in so many different countries. It’s just not easy to hear all this news. I’m all for peace.”

Rublev will take on the winner of the other semifinal match between Jiri Vesely and Deni Shapovalov in the Dubai Championships final.

Rublev has received tremendous support for his “no war please” message on social media:

Massive respect, it's always goosebumps when sportspersons use their platform to take a stand https://t.co/vTfmmC8O79

Dare we call this iconic? https://t.co/tfm3JnRWoj

I know this seems like nothing but any Russian speaking out against Putin or war is incredible brave https://t.co/jwLphvDfca

Wow. He will be talked about in history class one day in the future. 💯💯 https://t.co/sLGU4Ca4MG