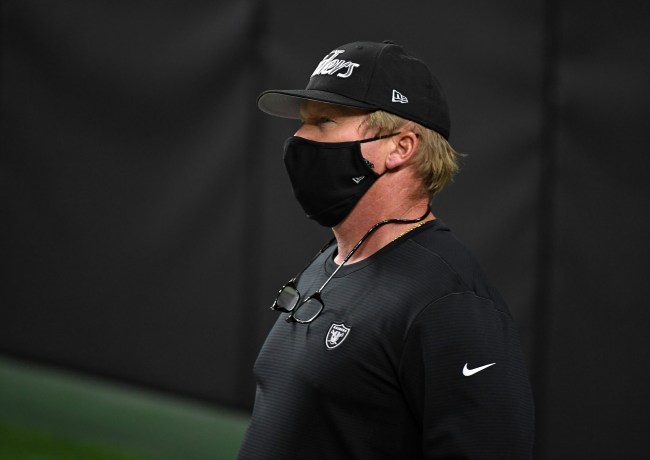 The Las Vegas Raiders have officially been eliminated from the playoffs after losing to the Miami Dolphins on Saturday night and Raiders fans aren’t happy with Jon Gruden’s strategy at the end of the game.

While down two points with over a minute left to go in the game, the Raiders deliberately tried not to score a touchdown in an effort to let the play clock run down so that they could kick a field goal to take the lead.

Here is Raiders running back Josh Jacobs sliding before scoring a touchdown.

And the Raiders taking a knee to set up the field goal.

Unfortunately for the Raiders, Dolphins QB Ryan Fitzpatrick was able to convert a wild deep pass with 20 seconds left that put the Dolphins in field goal position to win the game.

Raiders fans blasted head coach Jon Gruden for being conservative at the end of the game.

Worst job of coaching by Jon Gruden since the Tuck Rule game. Play for a field goal to go up by 2 instead of scoring a TD and going for 2 to go up by 5 or 7? I’m beside myself. 🤢

Jon Gruden thinking:
*Why go for a touchdown when you can go for a field goal*#MIAvsLV pic.twitter.com/kKHZCtKIUT

the @Raiders should have just scored the TD instead of doing stupid clock management BS and then kicking a field goal…. especially when they knew that a field goal could win it from the @MiamiDolphins!!! Wow just absolutely mind blown at the stupidity of Jon Gruden

10 years and $100,000,000.00 for a coach who plays for a field goal, loses by a field goal and misses the playoffs for a THIRD consecutive season of the Jon Gruden redux.

Jon Gruden literally just made the dumbest play call I’ve seen all season by letting the clock run on third down to get a field goal instead of going for the TD. You were on the ONE yard line! Wow. @Raiders #MIAvsLV

Appreciate Jon Gruden being a coward and settling for the field goal.

Jon Gruden plays for the field goal and gets beat by a field goal.