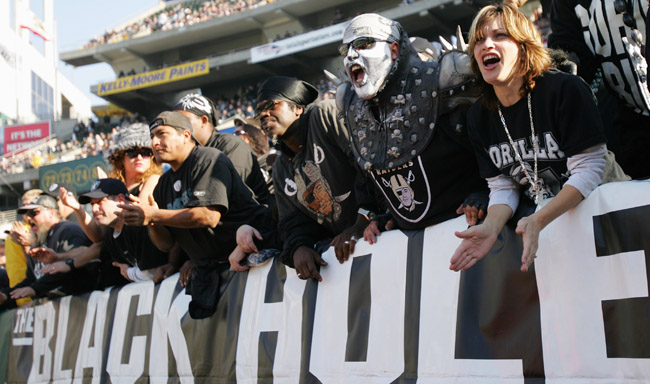 (Or should I say silver?)

Welp, Mark Davis and the Oakland Raiders made it official, filing relocation papers with the NFL to move to Las Vegas on Thursday.

Hard to blame them when you consider that they could be playing in THIS SICK STADIUM versus the decrepit Coliseum should their move be approved.

Now all they need is the thumbs up from 24 of the NFL’s other owners and it will be pretty much a done deal. (Let’s just hope all that talk about re-branding the team was just that…talk.)

Needless to say, a big move like this was met with ALL KINDS of reactions. Some are good, some are bad, but most of them are just comical.

Here’s a little sampling so far…

Raiders Fans: OMG THE RAIDERS ARE ACTUALLY GOOD THIS YEAR!!! FINALLY!! Worth the wait!
Raiders: *Files paperwork to move to Las Vegas*

Of course it makes sense that the Raiders file paperwork to move to Vegas on the 15th anniversary of the tuck rule.

Lol @RAIDERS called me up reminding me about the season ticket renewal program yesterday. Now today they are filing to relocate.

I been a hater of the Raiders for years, but I don't want them to move. I'll miss the possibility of stabbings when we play each other

With the #raiders moving to #lasvegas. I assume there will be a boom in #costcutters in the area to accommodate #markdavis needs.

Las Vegas Raiders? You already know there's going to be some games fixed! 😂

I can't wait for videos of Raiders fans…

As a longtime Chargers fan, if the Raiders successfully relocate to Las Vegas, then I will support… ugh… threw up a little bit, lol.

You thought NFL players got in trouble before, just wait until they either play for the Raiders or are on the road vs the Raiders #LasVegas

What's the over under in Vegas for a dead hooker scandal on the Vegas Raiders bye week?

Las Vegas Raiders sounds like an all male strip club

To all the #Raiders fans who were mocking San Diego for losing its team… pic.twitter.com/qHmaHDZ5Gf