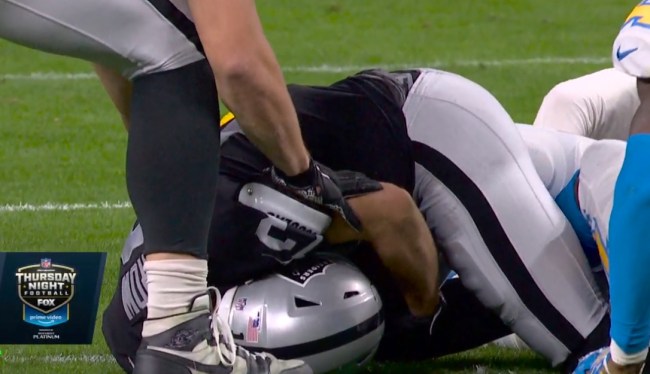 There was a scary moment in Thursday night’s game between the Raiders and the Chargers.

Before the end of the second quarter, Raiders wide receiver Hunter Renfrow appeared to get knocked out cold after taking a vicious helmet-to-helmet hit from a Chargers defender during a kick return.

This isn’t a penalty #nfl ? Renfrow was blasted helmet to helmet pic.twitter.com/CCuTczXFpg

Before getting picked up by his teammates Renfrow landed awkwardly on his neck.

Update: Renfrow left the game and is being evaluated for a concussion.

Hunter Renfrow is being evaluated for a concussion. His return is QUESTIONABLE.

Raiders fans were angry that no penalty flag was called on the play.

Helmet to helmet shot against Hunter Renfrow. No penalty. If a Raider did that to a Charger he would've been executed on the spot.

@NFLOfficiating why no flag on that Obvious h2h on renfrow? Is this not exactly the type of hit NFL wants to get rid of?

Nothing like watching Renfrow get destroyed on a helmet to helmet no call right after the refs hit us for a rare double penalty technicality. That’s real great.