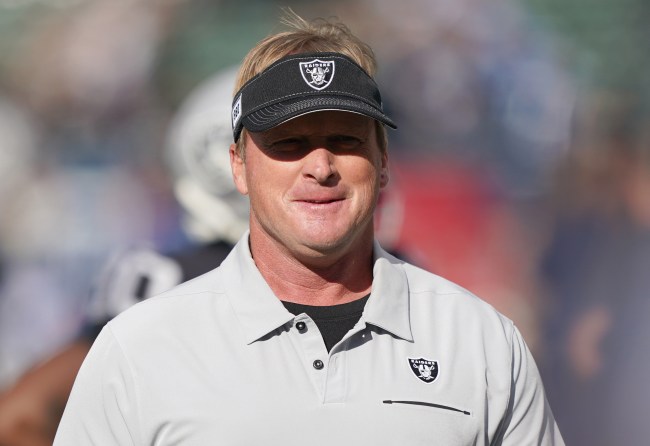 If there’s any story that exemplifies the eccentricities of Jon Gruden, it’s slugging 14 Miller High Life’s on a belly full of boneless buffalo wings and vomiting in the Hooter’s bathroom on an idle Tuesday afternoon outside of Dayton, Ohio.

I cannot confirm that actually happened, I’m just drawing from the inalienable truth that every grown man who’s ever worn a visor into Hooter’s had to be carried out.

In his latest stunt, the Las Vegas Raiders head coach reportedly was the mastermind behind some preparatory COVID theater, using a team-wide Zoom call as his stage.

“The Raiders players logged on to a Zoom call last week expecting to see Jon Gruden, and instead they saw Rich Bisaccia, the special teams coach and assistant head coach,” Garofolo said. “Bisaccia told them, ‘Guys, Coach Gruden has COVID and he’s at the hospital now being taken care of,’ and the players were taken aback. They shortly thereafter told them, ‘You know what, we’re just putting you on a little bit,’ and it wasn’t a joke, what it was was the team illustrating to the players this could happen at any moment to anybody.”

One more on the #Raiders from Inside Training Camp on @nflnetwork: Jon Gruden's attempt to "crush" COVID-19 included assistant Rich Bisaccia tricking the players into thinking Gruden had coronavirus. But it wasn't a mean-spirited prank. There was a serious message behind it. pic.twitter.com/I832Zy5g2a

Gruden and the Raiders ripped this straight from a Halloween episode of The Office when Michael Scott, wearing a Dick-In-A-Box costume, pretended to commit suicide by hanging as a way to scare the kids while also educating them about mental health.

NBC quickly pulled the scene from reruns and DVD releases after Caryn Zucker, the wife of then-president and CEO of NBC Universal Jeff Zucker, pleaded with her husband to cut the scene due to her work in suicide prevention.

Thankfully, both of these national treasures are still alive and still giving their co-workers the creeps.