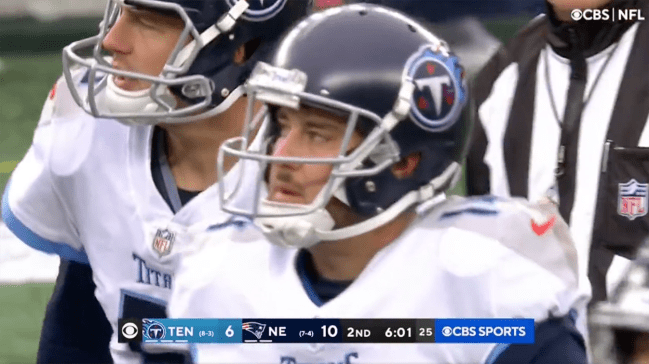 During Sunday’s game against his former team, Titans head coach Mike Vrabel won a challenge that he shouldn’t have had to make. As a result, it iced his kicker, Randy Bullock, who proceeded to doink the point-after attempt.

Early in the second quarter against New England, Tennessee scored on a short touchdown pass from Ryan Tannehill. Wide receiver Nick Westbrook-Ikhine turned toward the end zone, slipped and fell, and thrust the ball across the goal line.

However, Westrbook-Ikhine was ruled down at the 1-foot-line. Vrabel, visibly upset, encouraged the official to take a look at the play and discuss the very obvious touchdown with the replay assistant.

The referee did not. Thus, Vrabel was forced to use a challenge on a play that was extremely definitive. He was furious.

However, as a result, Titans kicker Randy Bullock was forced to wait for his chance to come on and kick the PAT. The Tennessee challenge unintentionally — and needlessly — iced Bullock.

When he went to kick, he missed. Bullock doinked the PAT off of the top of the upright and out.

It sailed right, hit the post and fell to the ground below. DOINK!

The audio of the kick, which was astonishingly booming, made for the loudest doink in the history of doinks.

To make the entire situation even funnier, Bullock did it again just a few minutes later— at the same upright. And it was just as loud, if not louder.

For whatever reason, the volume on Bullock’s kicks was thunderous. Perhaps there was a mic there? Regardless of what happened, we are the better for it. DOINK!