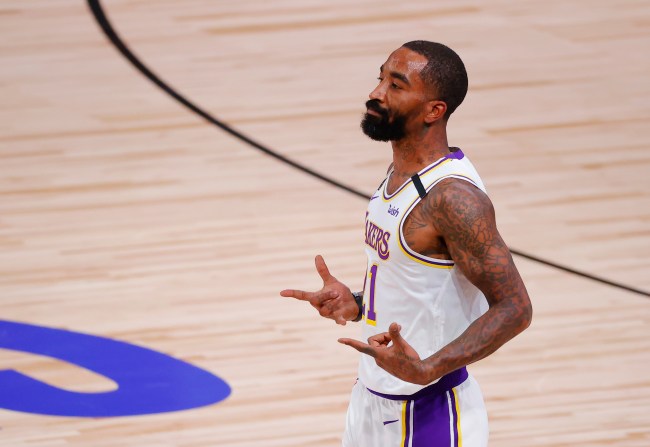 Now that the NBA Finals is over, with LeBron James leading his L.A. Lakers to the title over the Miami Heat, it got me thinking: Who are the worst NBA players to win multiple championships? James has four in his career, but the dude might just be the GOAT — at least, when you see the opinions of some fans. But what about the bench players who just tagged along? The ones who didn’t do crap to really contribute? The ones who provided the almighty “veteran leadership” in the locker room or during practice?

Knowing that James has carried teams to the NBA Finals with his insane level of play over the years, there’s bound to be a few guys who won multiple NBA championships with him who didn’t deserve it. Likewise, there are plenty of other players who have more than one ring that surely makes you ask, “WTF?”

Over the history of the league, there have been plenty awful players who have scooped a title by riding the coattails of a superstar, but when it has happened more than once, that’s when it just doesn’t seem fair.

Hall of Famers like Karl Malone, John Stockton and Charles Barkley never won an NBA championship, but these miserable players have at least two. Just a reminder that life’s just not fair, man.

Don’t get me wrong, I love me some J.R. Smith — especially when it comes to the way he celebrates his championships, which often include going shirtless for days on end. And when Smith played for my Cleveland Cavaliers back in the day and helped win the 2016 title in dramatic fashion over the Golden State Warriors, I always said he was good for at least one playoff win. Sadly, he was also good for a boneheaded playoff loss, though.

So what’s the problem then? Well… tell me why he deserves a ring with the 2020 Lakers. No, for real, convince me that J.R. did anything of significance to help the Purple & Gold beat Miami. I’m not sure anybody can.

After signing with the team on July 1, right before games in the NBA Bubble tipped off, Smith played a total of just 79 minutes during his time in a Lakers uniform, with his best showing being a whopping 11 points against the Portland Trail Blazers in Game 2 of the first-round series. It honestly makes me wonder if LeBron just wanted him around to party with after a championship victory, because, otherwise, he was kind of pointless to have around.

Besides the total B.S. of Will Perdue winning four titles, how about the fact that this dude was actually the No. 11 overall pick in the 1988 NBA Draft? That right there is surprising enough.

Averaging just 4.7 points, 4.9 rebounds and getting to play alongside Hall of Fame talent like Michael Jordan, Scottie Pippen, David Robinson and Tim Duncan, Perdue was able to do skate by doing the bare minimum in order to “earn” himself four rings. Seriously, how do you think all the Hall of Famers mentioned above feel about that?

For those wondering, his career postseason averages during those title years look like this: 2.4 points and 2.7 rebounds, only proving that he didn’t do a damn thing to help the Bulls or Spurs when it mattered most.

We all remember former NBA center Mark Madsen for his “mad” dancing skills following his first championship with the L.A. Lakers, but can you believe that this awkward white dude got to experience one more title before his career was over? Luckily, he didn’t bring back the moves the second time around.

In the words of championship starved Charles Barkley, “That’s turrible.”

With career numbers of just 2.2 points and 2.6 rebounds per game, Mad Dog was rarely on the court to contribute a damn thing, instead forced into high five duty from the bench for superstars Shaquille O’Neal and the late Kobe Bryant.

Dickey F’in Simpkins, man. The name itself warrants a little smirk, but when you consider he won three NBA championships during his career, well, that smile may turn to a scowl pretty fast.

On top of having one of the premier names in NBA history, Simpkins earned his keep with the Chicago Bulls after the team drafted him 21st overall in the 1994 draft. Ironically enough, that was also the year that Michael Jordan was out of the league, meaning the forward from Providence may not have been His Airness’ first choice had he not been swinging a baseball bat in the minor leagues.

However, once MJ returned following a year off and led his Bulls to three-straight championships, guess who benefitted? Yep, good ol’ Dickey.

With no career postseason stats and piss-poor numbers from the regular season of just 4.2 points and 3.6 rebounds per game, Simpkins was one of the most luckiest SOBs in NBA history — and he has three rings because of it.

Remember when Adam Morrison was hyped as the next Larry Bird? Talk about missing the mark. Considering the former Gonzaga product could barely make a shot, it’s brutal to think about how miserable his NBA career ended up, giving him the distinction of being known as one of the biggest draft busts in NBA history. But guess what he has that some of the best ballers the league don’t have? Two titles on his resume.

After Michael Jordan the owner took a chance on Morrison by selecting him No. 3 overall in the 2006 draft, as we all well know, the kid did nothing to warrant the selection, riding the bench and, ultimately, finding a home with the Lakers in 2008.

Doing nothing memorable while in LaLa Land, Morrison averaged a paltry 1.9 points and 1.0 rebound per game during his Lakers career, while totaling just eight points in his playoff career. 8 total points. That’s just absurd. It’s a good thing he was Kobe Bryant’s biggest cheerleader, though, because The Black Mamba got him those two rings before Morrison’s career was over.

A decent role player for a number of different teams, it’s not that Zaza Pachulia was terrible, it’s that, during the years he won back-to-back NBA titles with the team of the decade, the Golden State Warriors in 2017 and 2018, he was, well, terrible. In fact, one could argue that the only thing the former center contributed to the Dubs team was the whole “Zaza Rule,” which the NBA implemented for refs to call flagrant or technical fouls on reckless defensive closeouts.

Dirty play aside, Pachulia benefitted from having future Hall of Fame like Kevin Durant, Steph Curry, Klay Thompson and Draymond Green around him, who did the majority of the scoring and playmaking. That’s not to totally discredit Zaza, after all, he did average 4.3 points and 2.0 rebounds in 10.8 minutes per game during the playoffs on those titles teams. OK, that’s kind of a disgrace — but he’s still got two rings for minimal effort.

There’s a good chance you haven’t heard of Jim Loscutoff before — which is understandable considering most of us weren’t alive by the time he even called his NBA career quits in 1964. But, word on the street (or the Internet) is that he was known as being an enforcer during his hoops days.

Playing all nine of his NBA seasons with the Boston Celtics, Loscutoff had the luxury of watching greats like Bill Russell and Sam Jones lead Beantown to the NBA Finals in all but one of his seasons, going 7-1 in those appearances. If that’s not sheer luck, I don’t know what is. Imagine being a player who just happens to fall ass first into that kind of success. Not fair.

So did Loscutoff contribute? Barely, as he averaged just 5.5 points and 5.2 rebounds during his postseason career. Not awful stats, but you can’t tell me he did much to warrant SEVEN CHAMPIONSHIP RINGS! One or two is fine, but the thought of Jim Loscutoff having more rings than Michael Jordan shouldn’t sit well with any NBA fan.

As if you need me to explain why D.J. Mbenga is the crappiest NBA player to win multiple titles, the video above should be enough to understand.

A two-time champ with the L.A. Lakers in 2009 and 2010, Mbenga joins the aforementioned Adam Morrison as a beneficiary of Kobe Bryant, as the dude contributed just 2.3 points and 1.6 rebounds during his two seasons in Purple & Gold. It seems like those Lakers teams just stacked the roster with scrubs and gave the ball to Kobe and Pau Gasol, because it’s insane to see the amount of trash ballers that ended up with multiple rings.

Anyway, with D.J. Mbenga’s postseason stats being a disgusting 1.0 point and 1.1 rebounds per game during that same two-year title span, the former forward probably should’ve been selling beer rather than suiting up for two NBA championship teams.