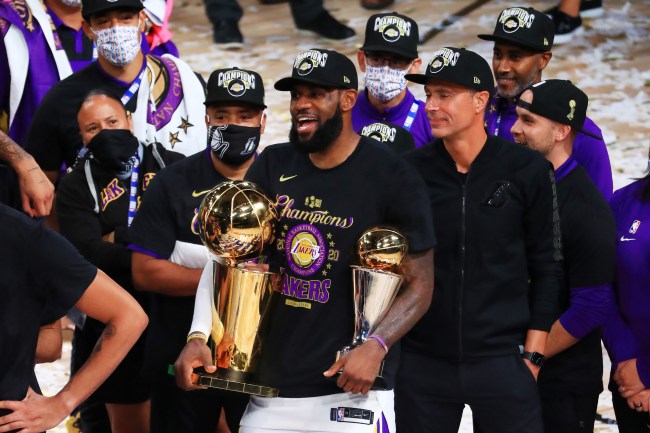 Is LeBron James or Michael Jordan the GOAT in the NBA? While that’s a hot debate, especially after the Los Angeles Lakers star just won his fourth career title, nobody really has the answers. I mean, sure, MJ’s six titles in six tries seems to put him above the rest, but James has now gone 4-6 in his 10 appearances in the NBA Finals, so which one is more impressive?

Personally speaking, there’s nobody better than Jordan, who didn’t just win those six titles by dominating the ’90s, but also reinvented the game off the floor by doing things nobody had done before when it came to marketing and building a personal brand. If not for MJ showing he was more than an athlete, there wouldn’t be a platform for LeBron James to do some of the remarkable things he’s currently doing. So, yeah, the GOAT debate is more than just the accomplishments on the basketball court; in my opinion anyway.

But how do fans across the U.S. see the GOAT debate between James and Jordan? You might be surprised.

Thanks to a new map from NBA analysts at BetOnline, which used geotagged Twitter data in tweets to figure out where each state currently stands on the debate, it looks like LeBron James now holds the edge over Jordan following his most recent championship. Take a look below at the results.

State-by-State data on the 🐐 debate

Now, is this the end all to the GOAT debate? Hell no. Just six months ago a similar map showed that, while James seemed to close the gap on Jordan in the conversation, His Airness was still considered by fans to be the best ever. So does LeBron’s fourth career title now make him the greatest? By sheer numbers, no, as he still trails Michael Jordan by two titles — not to mention other all-time greats like Bill Russell (11), Kareem Abdul-Jabbar (6) and Magic Johnson (5) in terms of rings won. But James is, arguably, the most polarizing of them all, which could just be due to the amount of access we have these days with social media and such.

Here’s how some NBA Fans reacted on Twitter after seeing the latest results from BetOnline.

It’s funny because most of the Leflop advocates weren’t even old enough to watch Jordan play.

Two different players from two different eras of basketball/not very comparable….one left to play baseball at the top of his basketball career…..

The GOAT debate between LeBron James, Michael Jordan and anyone else is a fluid situation. It changes from month-to-month, year-to-year and decade-to-decade. We’re all creatures of the moment, so, while the latest BetOnline map shows some geotagging following the Lakers’ latest championship, it sure as hell doesn’t mean this is the definitive answer. Plus, in 25 years, there’s bound to be another all-time great who will be able to stake his claim as the GOAT — so let’s just appreciate how incredible each player was during their respective eras and forget who holds some subjective distinction.