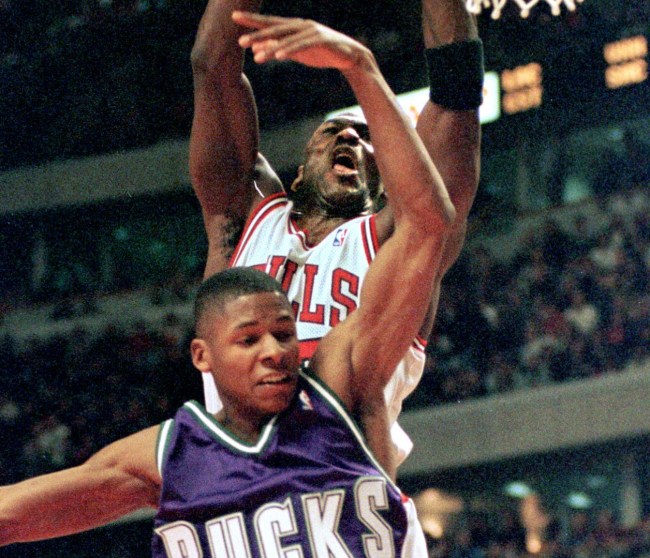 Ray Allen is thought of as one of the best shooters in NBA history, with the 10-time All-Star doing serious work behind the arc throughout his 18-year career. Plus, the guy was pretty clutch, with his three during Game 6 of the 2013 NBA Finals being one of the wildest shots in a championship game ever.

Although Allen made his mark on the league and became a legend in his own right by the time he retired, early on, he still feared the basketball god known as Michael Jordan. In fact, during a recent podcast episode with former teammate James Posey, Ray Allen described just how much fear was going through his body during a preseason game against MJ and the Chicago Bulls during the 1997 season. Needless to say, Allen was fanboying hard AF.

“My second game of my rookie year preseason, we played against the Bulls in 1997. So, Imagine that as a 21-year-old kid, you are playing against MJ. I was scared to death and in 97′, imagine hearing that theme song when he run down the floor and people they’re ready and waiting to watch the game.

“I’m on the floor stretching and he runs down the floor and I had to look up. It was like this is so surreal to me that I’m sitting on this court right now and I have watched this for the last 10 years of my life. So, I am like I am rooting for you against me.”

Considering Jordan’s Bulls were in the midst of their second three-peat at that time, it’s not surprising to hear that a young Ray Allen all but pissed his pants at the simple sight of MJ. To hear him not only admit, but also say he was sort of rooting for the GOAT while playing against him shows the power Jordan had over his opponents.

We all know Michael Jordan used a variety of techniques to get into other players’ heads. But, sometimes, simply sharing a court with the six-time champ was enough to scare the fuck out of somebody — and the experience clearly overwhelmed a 20-something-year-old Ray Allen. It didn’t seem to impact him much afterwards, though, given his Hall of Fame career.