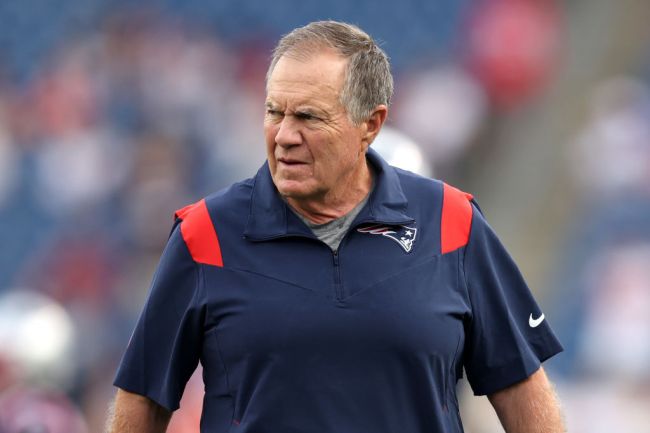 Bill Belichick is known for his drab, humdrum outlook on basically all things football despite being one of the most successful head coaches in NFL history.

He’s often short when dealing with the press, mumbling and grumbling his way through interviews as if it’s a hassle for him to give his thoughts on a game. He seems to be in a constant state of gloom no matter what’s transpired in the moments before.

This year, he might have a reason for that cheerlessness as the Patriots deal with issues on the offensive side of the ball. They’ve yet to name an offensive coordinator and seem to have no plan on how to handle play calling duties moving forward.

But on Wednesday, fans got to see him lighten up albeit in a cringy interaction with UFC President Dana White.

Bill Belichick and the Patriots took a team trip to the UFC headquarters, where Dana White presented the head coach with a title belt. Upon receiving the championship gear, he gave an uncomfortable turn to the crowd to show off his new attire.

Donning shorts, flip flops, and, of course, a hoodie, Belichick raised his hands in triumph while cracking a rarely seen smile. The entire clip exuded awkwardness, and fans had quite the time posting reactions to the now viral video.

He’s having too much fun this offseason. Fans aren’t used to seeing this.

He's having too much fun. Not a good omen for the season

Others noted that he was packing a little extra up top.

Billy got them heavies

Hope it comes with a manzier

And it wouldn’t be a Bill Belichick post without a few accusations of him cheating to land that UFC belt.

Did he cheat to get it?

Belichick and the Patriots will continue through preseason camp before their season opener in September. Take this clip in because it might be the only smile you get from the New England head coach this year.