Fans React To An Emotional Freddie Freeman Smashing A HR In 1st At-Bat Vs. Braves 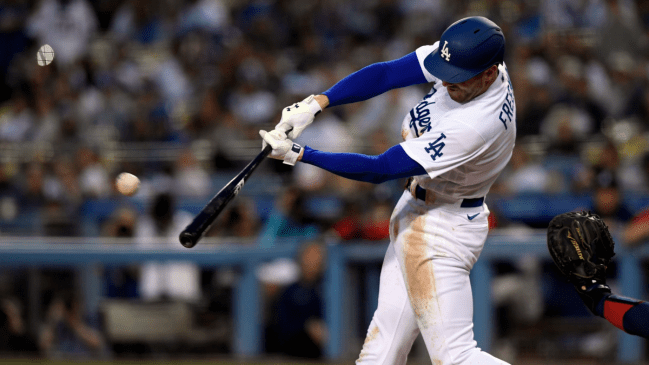 Freddie Freeman spent the first 12 seasons of his professional career in Atlanta.

The former Braves first baseman has been one of the most influential players in the organization over the last decade, helping lead the team to a World Series title in 2021. That was Atlanta’s first championship since the mid 1990s.

This offseason, however, he cut ties from the Braves, opting to head to the West Coast. Originally from California, Freeman returned home to the Dodgers where he starts anew.

On Monday, the left-handed slugger faced off against his former teammates for the first time since leaving Atlanta, and he was certainly emotional to see old friends.

Freddie Freeman says there were plenty of hugs to go around with his former teammates today. #Braves pic.twitter.com/fOFZZfX6Ou

Freeman speaks to his lifelong friendships developed within the organization, as well as reflects on what they were able to accomplish in his 12 seasons.

Freddie Freeman went to the #Braves clubhouse this afternoon and had about “25 hugs and about four tears.” Asked if this week will give him closure, he said he’s not looking for closure and loves everyone w/ Braves, that he spent 12 years in ATL and won a championship with them.

Freeman also received his Silver Slugger Award, which he won last season in Atlanta after hitting .300 with 31 homers. The first baseman led the National League in runs scored for a second straight year.

Prior to tonight’s game, @FreddieFreeman5 received his Silver Slugger Award for the 2021 season. Congratulations, Freddie! pic.twitter.com/niS4Fym0nU

The pregame festivities were great to see, but fans were anxious to see the start of the highly anticipated contest.

When the first pitch was thrown out, emotions subsided briefly before Freeman did something that got the crowd right back into it.

Freeman was emotional prior to the start of the game, and in the most fitting script, he would homer in his first career at-bat against Atlanta.

You can't make this up. @FreddieFreeman5 just homered in his first at-bat against the Braves. 😱 pic.twitter.com/twwqlmghvq

The drive was Freeman’s first home run since joining the Dodgers, and I’m sure it felt good to start this nerve-racking matchup with a trip around the bases.

After the home run, fans and media took to social media to talk about the at-bat.

Freddie Freeman with a home run against the Braves😢
pic.twitter.com/Dvo2bw7qBT

Freddie Freeman goes yard, opposite field, in his first at bat against the Braves. Watching with 11 year old, “Of course,” he says.

Freeman spoke further on the blast after the game was over, saying it was the perfect end to a “special day.”

Freddie Freeman’s first home run for the @Dodgers came in his first at-bat against the @Braves. What a moment last night. Here’s my postgame conversation with Freddie after an emotional day. @MLBNetwork @MLB pic.twitter.com/3lfV4qyVhR

It was definitely the storybook start to this series. Not sure that Freeman can follow this performance up over the next two games.