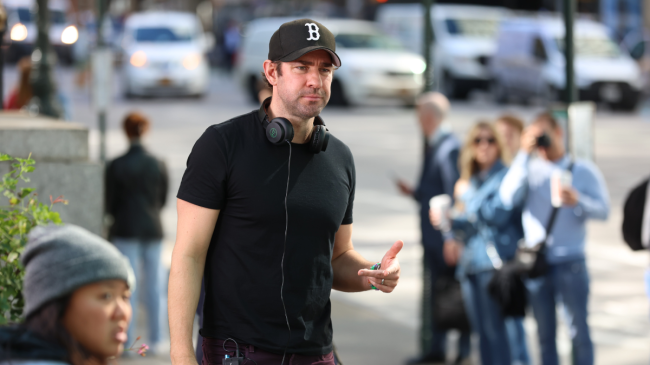 ESPN aired a Monday Night Football bit starring John Krasinski ahead of the Bears vs. Patriots matchup. Krasinski, a Boston native, highlighted New England head coach Bill Belichick as he looks to move to second all-time in career wins. A victory would land the legendary coach win No. 325, moving him ahead of George Halas.

Krasinski is best known for his role in the hit sitcom The Office. He’s also a known sports fan. That fandom came out a bit in the show with his character, Jim Halpert, briefly moving on from Dunder Mifflin to work for a sports agency. Of course, in the sitcom, Krasinski was a Philadelphia fan.

In real life, he’s Boston through and through.

The Pats obviously sit near and dear to the hearts of all Bostonians, which made him a perfect fit for the Belichick bit. Unfortunately, the animation of the TV star was a little off. That had many talking on social media.

“I’m from Boston, and I’m wicked biased, but I’m here to talk about Bill Belichick. The GOAT in a hoodie. He’s tied for second all-time in wins. No big deal. Shula’s first, ’72 Dolphins, whateva. But Bill’s tied with papa bear George Stanley Halas. The guy practically invented the Bears. History could be made tonight people. Don’t change your clicka.”

If the bit wasn’t bad enough, the animation was even worse. Unrecognizable, to be quite honest.

This Josh Krasinski animation will go into the Hall of Fame pic.twitter.com/w535OpXbNG

One person wrote, “John Krasinski should sue for this animation,” which was something we could all agree on.

john krasinski should sue for this animation. my god.

This person posted, “That… is not John Krasinski.” Like we said, unrecognizable.

that … is not john krasinski https://t.co/4xWBKr89Az

Another viewer said, “That John Krasinski animation was the scariest thing I’ve ever seen all Halloween season.” Nightmare fuel.

If you gave me one thousand guesses I would never guess this was supposed to be John Krasinski. pic.twitter.com/3nOZzHfBzS

I wanna believe John Krasinski was forced to approve this ESPN thing at gunpoint… pic.twitter.com/d3syXE0tRi

I am scared of claymation John Krasinski